The Future of the Office Space is Definitely Here 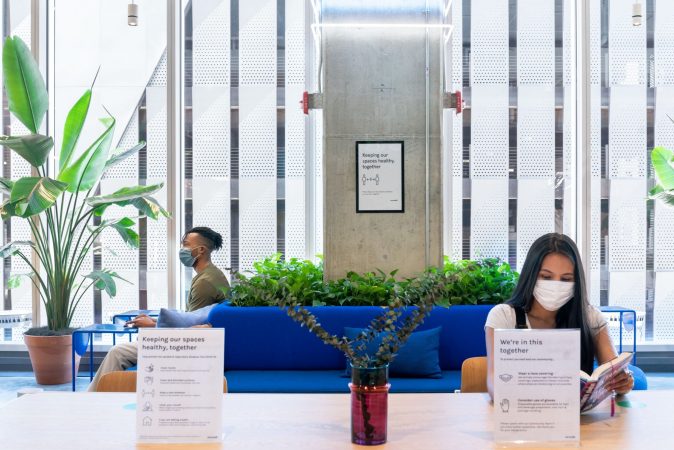 If 2020 were a word, “reform” would serve the year well. As most of us spend the majority of our days working, it may come as a relief to hear that a reformation of the workplace, sparked by working from home, may not be too far in the future.

Many of us have grown accustomed to the comfort of home as we work, as well as co-working spaces that serve to fill an office-shaped hole due to pandemic office closures. For years, coworking spaces have offered an inclusive venue, encapsulating as many workplace needs as possible. When we return to work, post-pandemic, imagine yourself reunited with a workplace as comfortable as your home, and as pliable as a coworking space. It sounds nice, doesn’t it?

Since their inception, co-working spaces have offered an array of settings. Conference rooms for meetings, cubicles for individual needs, community spaces for collaboration, and even couches and chairs to serve as a more comfortable option. These spaces, due to this inclusivity, are not only appealing to offices with varying office needs, but also to individuals and our unique working styles.

Similar to the variances in learning styles, such as visual, aural, verbal, and physical, it is believed that there are different working styles as well. For those of us diagnosed with neurocognitive differences like Attention Deficit Hyperactivity Disorder (ADHD), Dyslexia, Anxiety, Autism, Depression, Obsessive-Compulsive Disorder, and others, we find working in cookie-cutter-cubicle environments difficult. Thus, diverse floor plans, depicted in the following design, are similar to that of coworking spaces and offer an inclusive workplace to the varying levels of cognitive function seen in today’s workforce. This variance is often referred to as neurodiversity. 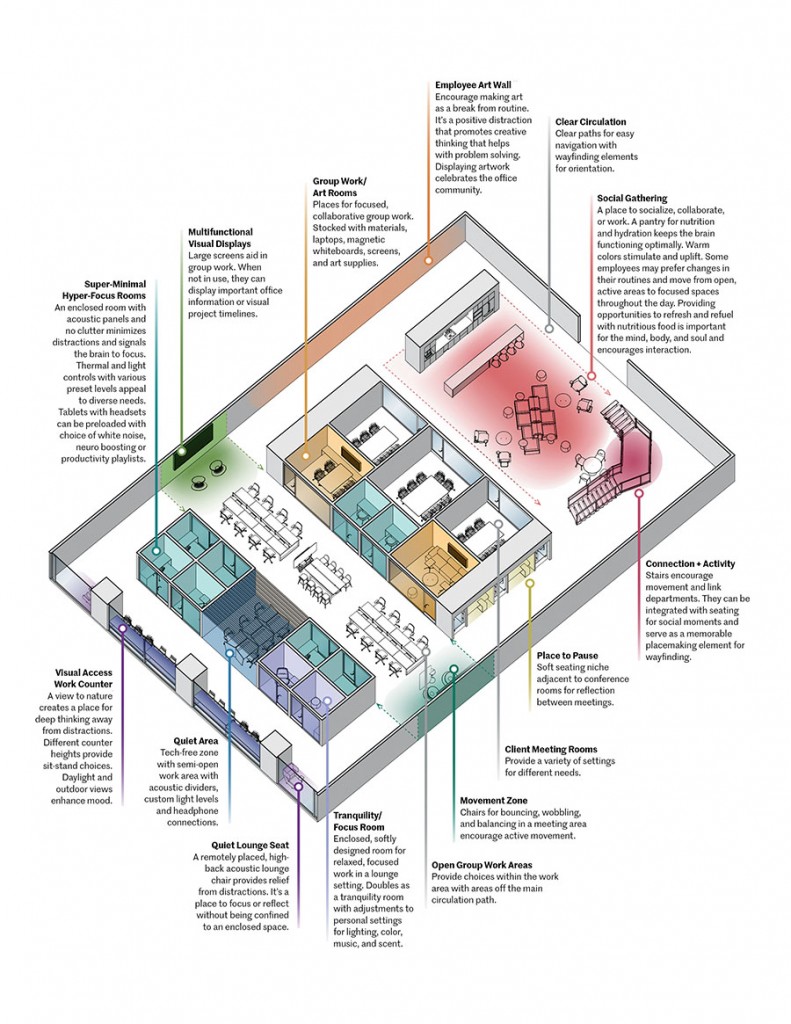 DESIGN OF A NEURODIVERSE WORKPLACE BY HOK

The Director of Marketing and Brand Strategy at AIREA, Jill Margulis, is fascinated by how a physical arrangement can be influential in an individual’s productivity. To her, it is vital to not only be inclusive in the floor plan but also to see spaces differently from their inception. For example, some people work better in a cafe-like environment, so she suggests bringing “Starbucks” to the office. Also, simply adding power strips to the lunchroom can be beneficial to certain employees long term. “People like choice,” Margulis says. 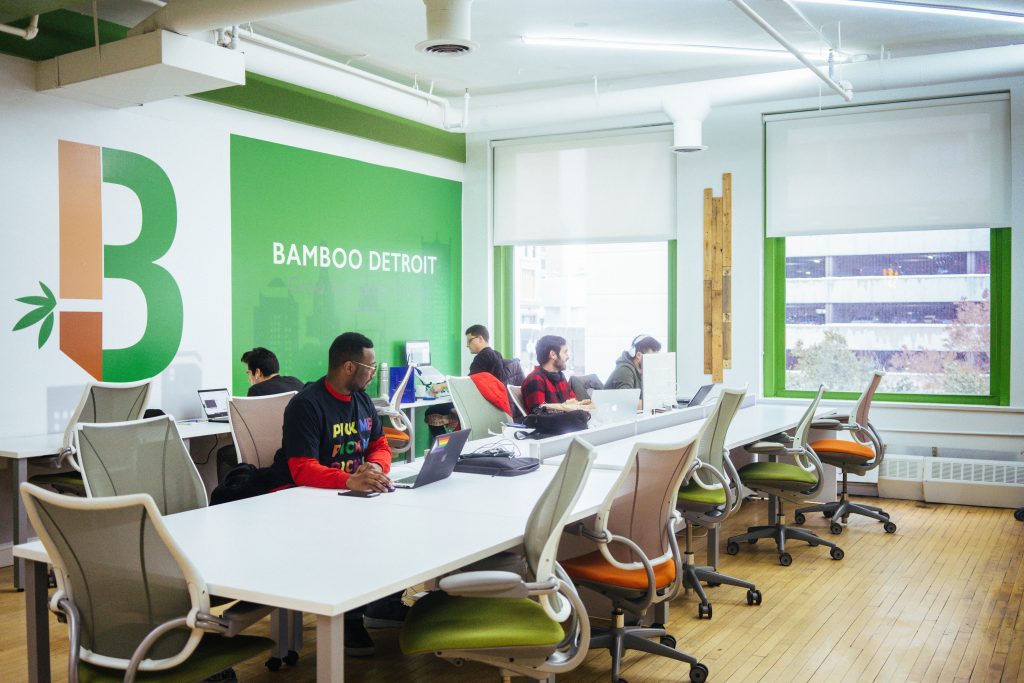 This array of choices at co-working spaces, along with their typically beautiful and clean environments, have become obvious in their influence in other office’s designs. Work Design Magazine describes destination-worthy workplaces as a part of the near future. Their definition of the term, “an inviting environment with a variety of spaces and amenities,” essentially describes co-working spaces in this current era.

Margulis suggests that companies should take time to use coworking spaces as an inspiration, then tailor their office specifically to the needs of their employees and fields of work. “I think companies would miss out if they didn’t see their workplace as an opportunity to create that [a destination-worthy] experience for their employees and their clients,” she says.

If offices take on attributes of co-working spaces, however, then what remains unique to them? To the Chief Operating Officer at Techtown, Kelly Kozlowski, co-working spaces will remain distinctive and useful due to their multi-company clientele base. Networking is almost synonymous with their space as different individuals from

different companies work near each other and use the same spaces. “Being able to set the stage for that kind of interaction is going to be important once people feel even more comfortable working together in person,” Kozlowski says.

For employees of small non-profit organizations, like Megan Owens, networking is a huge benefit of the venue. Owens is the executive director at Transportation Riders United and has been using Techtown’s co-working space for almost two years. Since then, she discusses her appreciation not only for meeting other people but also as a place to work outside of her home without the maintenance or financial ties of an office building. “It works very well for us to have a physical space,” says Owens, “but then also to have flexibility.”

What is the Future of Offices and Coworking Spaces? 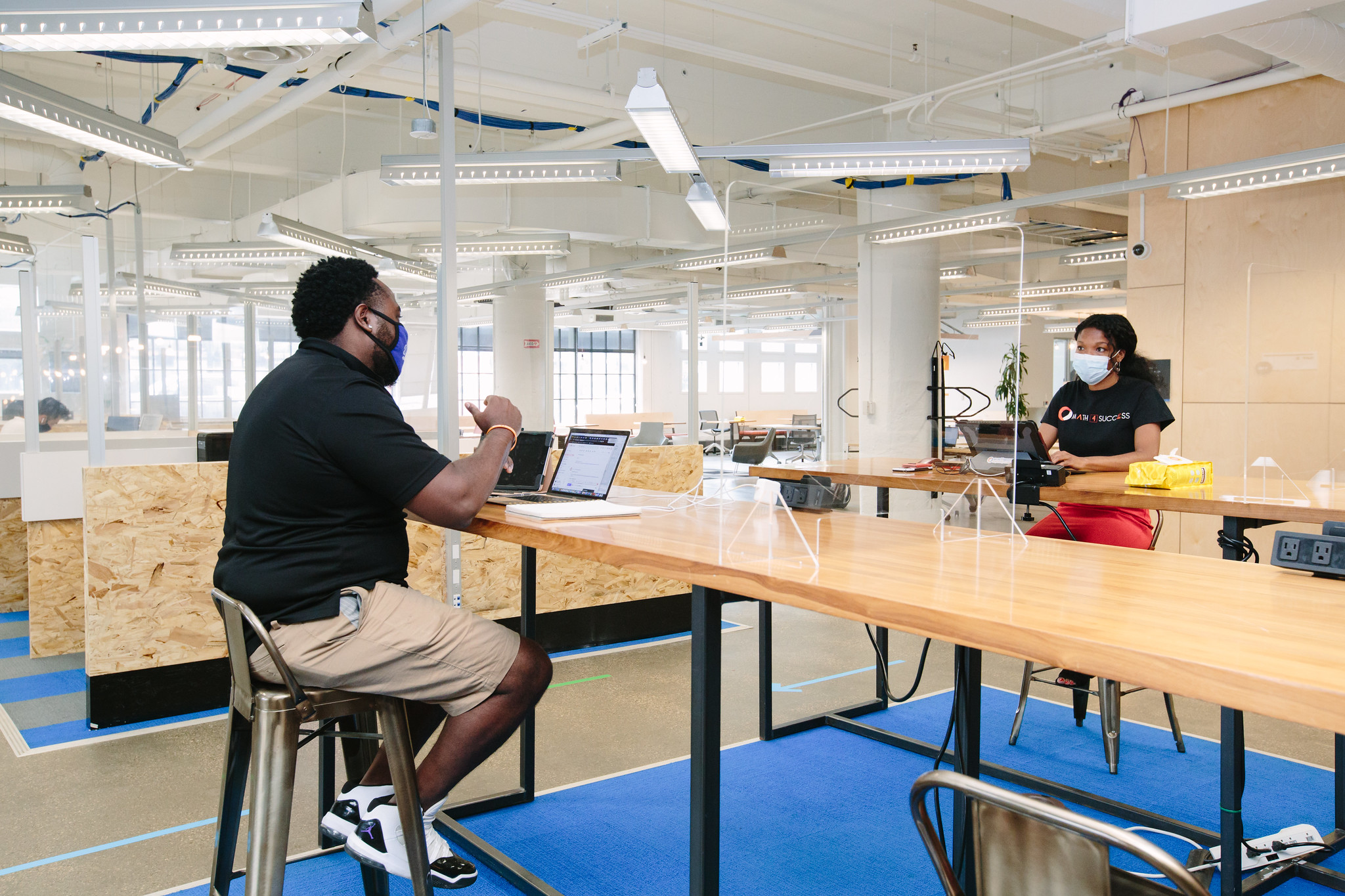 Organizations like Dropbox, see many benefits of their new, Virtual First work model. Dropbox, according to this model, is allowing their employees to work from home indefinitely. Along with this announcement, the company plans to offer in-person office spaces for employees to use in a collaborative fashion post-pandemic.

The Midwest Area Director at WeWork, Erik Wullschleger, speaks to other pandemic influenced transitions such as Dropbox’s. “What’s clear is that for many companies, the office they left this spring will look vastly different from the one they will return to. Companies are increasingly looking at different models for their offices, including hub and spoke, wherein they have one ‘hub’ headquarters office and a number of ‘spoke’ locations throughout the city. Wullschleger continues, “These companies are looking to de-densify and provide their employees with flexible office options.”

Bamboo’s co-founder and CEO, Amanda Lewan, comments on these changes as well, “We believe the future of work is flexible. That people should have the flexibility to work from home or from an office on their own terms when they need it. This is creating increased demand in creative flexible workspaces. We suspect there will be less demand for long term commercial leases, and more demand for short term membership models like Bamboo.”

It may be inspiring that a time as difficult as 2020 was, it has influenced the future of a reformed workplace. This shift in companies to downsize their office areas and rent space at places like Techtown, WeWork and Bamboo accentuates the importance of a flexible, neurodiverse workspace, in a post-pandemic world.