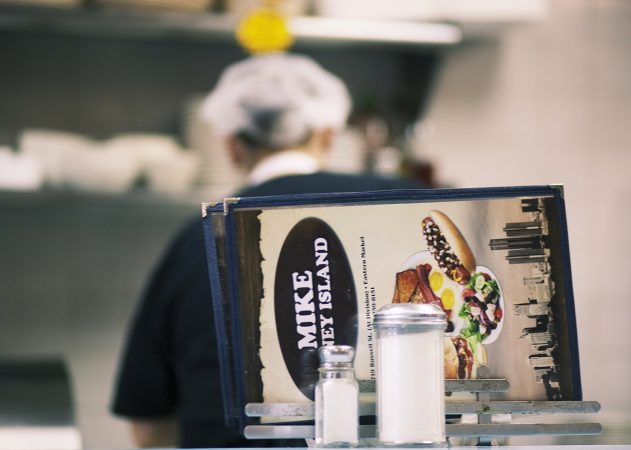 I grabbed a seat with Vince Paul at Mike’s Coney Island in Detroit’s Eastern Market and discussed his odyssey, his return back home, and how he’s marrying his global perspective with that of Detroit – all that over quintessential Coney dogs, chili, onions, and yellow mustard.

He talks with his hands, could go on for hours about how Detroit shaped him, how it inspired him. He has an unmistakable optimism, and his kinetic energy reverberates, especially when the city is the topic.

As president and artistic director of the Music Hall Center for the Performing Arts, Paul takes that enthusiasm and injects a global perspective into the annual programming.

The diversity of the acts ranging from the Russian National Ballet to the China’s Shen Wei Dance Arts to Motown’s own Smokey Robinson – all draw an eclectic array of talent to the city that he had spent 25 years away from while working in New York City.

Scott Rutterbush: You grew up in Detroit, did that shape your world view?

Vince Paul: Yeah, I was born and raised in the city. My mother remarried in white flight, and by the time I was 10, we flew out of Detroit and went to the cozy ‘burb of Farmington. It was an interesting time in the Americana of the 70s, urban sprawl moving into the suburbs. But I was really into the idea of traveling and world cultures, so by the time I graduated, boom! that was it, I was New York bound.

VP: I started to look back at my hometown and realized our cultural diversity. Around the turn of the 20th century you have the Italians, Poles, African-Americans coming up from the South, and in the 21st century you have the Indians, Chinese, Russians, the largest Iraqi population outside of Iraq. When you begin to really analyze it, you’re like, ‘our kids are learning from each other, and now we’re inventing techno or Motown or we’re fusing different cultural points of view and evolving, so maybe we could do this in business, right? In reality, the same sort of creative mind that goes into writing “I Heard It Through the Grapevine” goes into designing brake chutes.’

SR: What motivated you to say “I want to do this in Detroit?”

VP: My truth is that in Detroit I help make a world capital of innovation, economy, influence, and education. We can teach the world. We’ve been teaching the world. I call it cultural influence. Pick something really great and be proud of what it can be. Then you have purpose, and that doesn’t grow on trees, so it’s fortunate that I found something. Detroit is about the pieces that connect us.

SR: And what was it about the Music Hall?

VP: The worst thing ever is a linear conversion. In the same month we’ll have the Chinese circus, Indian Bollywood, Jewish Cultural shows and everything in between. Now that’s a reflection of our society. It’s a reflection of our community.  I’m convinced that unhappiness comes from conflict, and conflict comes from misunderstanding. The arts have a crucial role to play in that paradigm. When you understand something you didn’t understand going into the show, then it’s dialed the conflict that’s inside you.

SR: We see fresh-faced creatives returning and coming here for the first time. What’s the city going to look like?

VP: For quite a while we’ve been this underground party spot, a creative place. If you didn’t know somebody, Detroit was a drag, you saw tumbleweeds. So, I built a “nightclub,” put a sign on it and it was a success because there’s an obvious market for it. That’s how the underground thing becomes an explored thing.

Detroit’s diverse, and it’s only going to be more so.  Why not, instead of being an Arab American Detroiter, why don’t we move the word “Detroit” up in that sentence. Whether Indian, Jewish, African-American, Russian: put ‘Detroiter’ first. That’s what will lead to a powerhouse of a cultural and creative world capital.