It’s 1893 and the United States is in economic turmoil. Two of the largest employers in the country have collapsed, the stock market is panicked, banks are failing and thousands of businesses and farming communities are closing their doors. Unemployment is rising and many cities around the country are experiencing food scarcity. The attributes of this depression will rhyme with patterns of Detroit’s suffering throughout the next two centuries.

Detroit was hit particularly hard by the crisis, however, it adapted. Mayor Hazen S. Pingree rallied the city around his vision for urban cultivation. He found 430 acres of vacant land to be used for what would be known as Pingree’s Potato Patches. Neighborhoods came together to grow all kinds of fruits and vegetables. But mostly potatoes.

Although not everyone equally benefited from the program, it’s estimated that the city grew 14,000 worth of food to feed the community in its first year with 954 participating families. It continued to gain support and feed citizens until the economy began to improve.

The Potato Patches were ultimately seen as a success, however, they did not begin without hesitation or controversy. Many skeptics believed the program would bring nuisance and domestic conflict to Detroit. Potato bugs would plague the streets and unemployed men would be too lazy to garden successfully or people might be inclined to steal one another’s harvest. 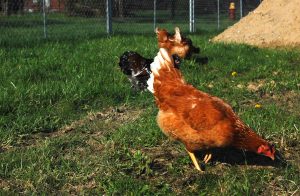 Now, in the 21st century, the debate over urban farming is strong and in some ways, it parallels the discourse of the late 1800s. Through careful public engagement, the city passed its first urban agriculture ordinance in 2013 which allowed for cultivation on permitted sites. But the ordinance does not allow for any type of animal husbandry related to farming and that is where the conversation has shifted.

Detroit-based cultivator Andy Chae from Fisheye Farms says that keeping animals is an important part of the process of food cultivation. “There are not many sources of manure around Detroit. To be able to collect your own and know that it doesn’t have antibiotics would be awesome.” Chae sells eggs, but because of the city’s restrictions, he outsources them from a farm 50 miles away when it would be much more efficient to collect them from his own chickens.

Detroit Future City estimates that Detroit has 24 square miles of vacant land and according to the Detroit Food Policy Council’s 2019 Food Metrics Report, 39% of Detroit households are food insecure.

One might look at these statistics and confidently say there is an overwhelming need for the intervention of a sustainable and localized food system. Detroit has a strong community of gardeners and farmers who want to be a part of one and many are cultivating under the 2013 ordinance. But it’s not that simple. Detroit is a diverse city, home to all kinds of people with all kinds of expectations for what the city’s space will be used for.

Kathryn Underwood is a Senior Planner with the Detroit City Planning Commission. She has been working for 30 years to help create freedoms for farmers in Detroit. Underwood speaks with empathy for those who are concerned about the negative consequences of allowing farming in the city.

When people buy a house, they buy a neighborhood, says Underwood. Some of them came from the south to get away from a certain lifestyle.

When the neighborhood starts changing, resistance is understandable if that change doesn’t agree with the reason why people originally moved there.

For animal husbandry to be allowed in Detroit, amendments to both the Zoning Ordinance and the Animal Care, Control and Regulation Ordinance need to be passed by Detroit City Council. Underwood is responsible for drafting them. Her philosophy is that disagreement between farmers and their neighbors can be quelled through patience, compromise, and finding the proper balance.

The Detroit City Planning Commission has reached out to the community in search of its opinions on the matter. In 2016 there was a public hearing on animal husbandry from which Underwood learned that there isn’t a lot of grey area in public opinion. She says people are either very passionately supportive or want nothing to do with it.

During her community outreach Underwood also realized that although the people who want to keep animals are the most vocal, they’re not necessarily the majority. She says “the challenge is to get the two sides to listen and consider what the concerns of the other side are.”

Chea and Underwood both agree that if a farmer is introducing animals to a neighborhood, they should have to go the extra step to make that indoctrination welcome, but seem to disagree the specifics. 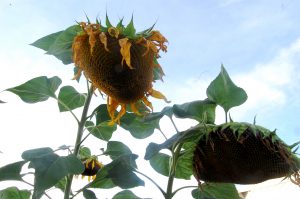 SUNFLOWERS JUST BEFORE HARVEST AT AN URBAN GARDEN IN MIDWEST

DCPC has been working on a set of statutes to be enforced through the Animal Care, Control, and Regulation Ordinance that would balance these concerns as well as address concerns for animal welfare.

One statute considered for the ordinance is a minimum lot size requirement of at least 6000 square feet. This would ensure space between animals and non-farming neighbors as well as enough room for the animals. Many lots in Detroit residential neighborhoods are between 3,000 and 5,000 sqft. So the logic behind the statute suggests a farmer would own the lot they live on as well as the one next door.

“Buying land in the city has been a hard process for a lot of farmers,” says Chae. Most vacant land in Detroit is owned by the Detroit Land Bank Authority which offers vacant lots to adjacent property owners at reduced prices, however, he describes that situation for a farmer as, “few and far between.” In addition, one must submit a proposal to the DLBA disclosing intentions for the land which he says can be denied if they don’t like it. He doesn’t believe that DLBA doesn’t want to sell to farmers specifically, but there are many legalities involved and the institution has made the process challenging for him.

Progress towards a solution has been slow but not to the fault of Detroit’s policymakers. This debate hosts a lot of conflicting interests and in order to even pass the 2013 ordinance, an administrative exemption had to be made to Michigan State Legislation. Also, since Underwood started, Detroit Animal Control has gone through four different directors which she says has been a burden on the process.

Yet there may be a light at the end of the tunnel for farmers. Once the new ordinance amendments are drafted, they will be presented to the public. They will then be revised by the Detroit City Planning Commission before going in front of the Detroit City Council for a vote. Underwood hopes to see that vote before the end of the year so she can retire with a balanced and deliberate urban farming program as part of her legacy.