Detroit Sounds: Mac Saturn the Band Sits Down to Talk About How They Listen to Music. And Their New Album “Stomp Shop” 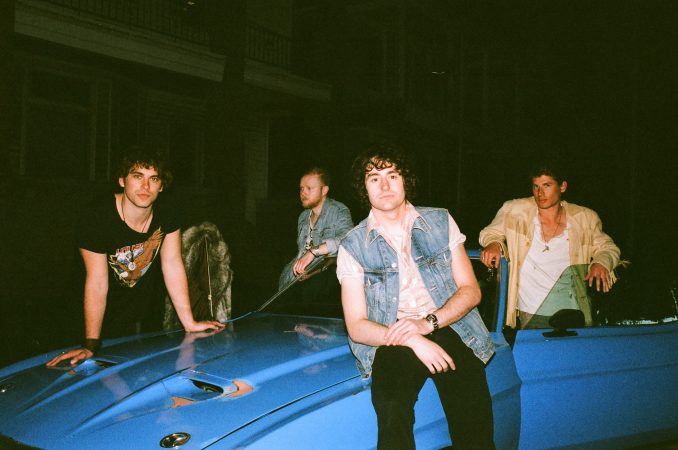 In the time of the Soundcloud rapper, the idea of coming together to form a band seems like an idea from a totally different era, even though it literally was an idea first thought of in a different era. But besides the point, enter Mac Saturn and a truly original ensemble.

Echoing the beats first put forward by giants such as The Doors, the magic comes from a collaboration between lead vocalist and rhythm guitar player, Nick Barone, drummer, and vocalist, Carson Macc, Jive Chmielewski on bass, and last but certainly not least, back-up vocalist, and lead guitar player, Brett Dooge.

Together the four friends have been able to create a sound that is so much more than what you would find from a simple garage band, instead, they bring back the sounds from the golden age of Rock and Roll.

Mac Saturn gave us a rundown of some inspirations, dreams and musical feats with just the slightest hint of banter.

DII: How Do You Listen to Music in Your Personal Time?

Nick Barone: On a record player.

Carson Macc: I would say it depends on where I find myself. At home, it’s almost always our record collection coming through our massive Pioneer high-fi system that my Aunt Flo gave us from 1979. If I’m out and about I’m a Spotify man through and through. Despite their lack of monetary morality, I enjoy having everything at my fingertips whenever I want it. (Everything except Frankie Valli and the Four Seasons full catalog apparently)

Jive Chmielewski: Usually on headphones or in the car. Streaming.

DII: The Last Album You Listened to in its Entirety?

NB: Bird at the Roost by Charlie Parker.

JC: Everything Will Be Alright In The End by Weezer.

BD: You Can Tune a Piano, but You Can’t Tuna Fish by REO Speedwagon.

CM: Garage Rock minus the garage with a touch of “roll”.

DII: What’s an Instrument You Wish You Could Play?

CM: I’ve always found a great interest in the trumpet. Such a powerful sound considering there are only three buttons to push. The only thing easier than three buttons is two drum sticks, so you can see my taste is purely minimalistic.

DII: If You Had a Theme Song, What Would it Be?

CM: The Beast by Milt Buckner (no explanation/assembly required).

CM: We opened for Rattlesnake Shake (a Peter Green Fleetwood Mac Tribute Group) and it was one of the most spiritual experiences of our young adult lives. Jim McCarty was in the back and was a friend of the group, he came up and ripped through a few slow blues numbers, right there, in front of our very eyes. Detroit is an exciting place to be loud right now.

DII: What Were Your Musical Influences?

CM: Rhythmically speaking, especially for the new record Stomp Shop, I was majorly influenced by Mitch Mitchells. Particularly his phrasing and interpretation of the song’s riffs/vocals. Other influxes include, but are not limited to, Watts, Mr. Baker, Art Blakey, John Densmore and whoever plays on that T-bone Walker record from 69’(Where he’s sitting on the floor holding that sunburst double cutaway).

JC: Pop punk like Green Day early on, the bass really stood out to me. Got into stoner rock like Kyuss and Qotsa in middle school. All over the place, lots of Hendrix and The Doors, Neil Young, White Stripes, Arctic Monkeys, AJJ.

DII: How Has Music Shaped Your Life as a Person?

NB: Above all else it’s given me an identity. In a more immediate sense I’ve been lucky enough to build a life around it.

CM: I don’t think music has shaped my life too dramatically over that past few years. I feel as though if we hadn’t gotten into Rock n’ Roll, we would have gotten into something else just as loud and just as obsessively. It has, however, made it a lot easier for us to wear whatever we want.

BD: Givin’ me something to do at a bonfire.

CM: Any and all Johnny Cash.

BD: I don’t own headphones, but it would be Fleetwood Mac.

CM: L.A. Woman. Try driving on those freeways at night with that track on and tell me that’s not the first one that comes to your mind every time.