Detroit Sounds with Tony DeNardo of the Muggs 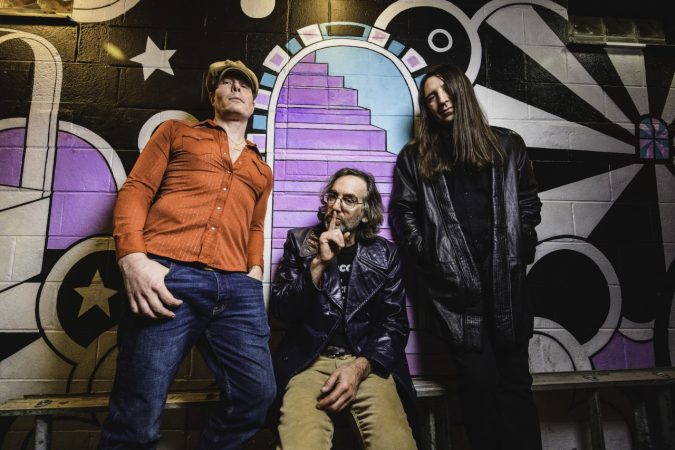 Tony DeNardo met Danny Methric when they were 13—”We just fell in love with music together the blues and rock and roll and the Beatles.”

At 19 they picked up their instruments—Tony the bass and Danny the guitar.

Shortly after they formed their first band, Fat Belly Brown, and Tony recalls, “always had a blues band going at the same time.”

Eighteen years ago, Tony suffered a stroke that nearly killed him. It took him months to regain the ability to move and speak. He never regained the ability to use his right arm. Despite the young bands burgeoning success, Danny made it clear there would be no Muggs without Tony.

To this day, the two are more like brothers than bandmates. They spend their free time together, finish each other’s sentences and publicly use the moniker ‘Muggs’ as a last name: Tony Muggs and Danny Muggs. For forever I had no idea what their actual last names were or if they had them.

No doubt this friendship was fuel to Tony’s actual recovery—along with some encouraging words from their mutual friend Matt Smith, of the band Outrageous Cherry:

“He pulled me aside one time was—this was about six months after the stroke. I was walking around with a cane. My body was just broken. I was very weak, but I wanted everyone to know that my mind was still there, and my spirit was strong, even though my body was broken.

I was going out to shows and like sucking up my pride and saying, ‘This is where I am now.’ I didn’t realize I’d ever play music again. I thought my career was over. And then, Matt says, ‘Why don’t you try playing the keyboard like Ray Manzarek? Like bass on the keyboard.’

I ruminated on that idea for a while and then after a year and three months, I still wasn’t getting back anything in my right hand. Or my arm was very weak. So, I figured it sounded like a good idea. I called Danny, who was on tour with the Paybacks at the time, and I asked him for his blessing because we’re a three-piece, and I always say you can’t bullshit a three-piece. Everyone’s got be on point, and I didn’t want to be in the position of ‘Oh, poor Tony. He’s trying so hard.’ I wanted him to know, if I was going to do it, I was going to do it 110%.

Danny said, ‘Go for it.’ And then it just all worked out.”

Tony’s stroke doesn’t define him, but what does define him is his fierce determination and self-proclaimed Peter Pan commitment to “never growing up”—perhaps the ultimate expression of living in the moment.

The band’s been independent since 2006, when their first label shuttered—which means Tony spends as much time playing manager as musician. He splits his time away from the Muggs playing in other bands and booking shows at the Cadieux Café, Armageddon Beach Party Lounge, Watermark Bar & Grille and Bogartz Bar.

In recent years, he’s become something of a knowledge resource for younger musicians, taking bands like Asphalt Flowers and Mac Saturn under his wing.

Between all of that, he’s putting the final touches on ‘Autobiograffiti’, the second full-length album from his band, DUDE, which is his band and his songwriting—”As opposed to the Muggs which is mainly Danny’s songwriting. I help him with harmonies, arrangements, and I like writing my bass lines. Otherwise it’s all Danny Muggs!”

In addition to DUDE the band, Tony is working on an autobiography under the same title. For those of you curious to know the whole story, it’s coming.

In the meantime, we caught up with him for a brief interview.

CV HENRIETTE: THE LAST ALBUM YOU LISTENED TO IN ITS ENTIRETY?

CVh: AFTER THE SHOW, LAFAYETTE OR AMERICAN CONEY ISLAND?
TD: Always Lafayette since I was a little kid.  Never American Coney Island!

CVh: WHAT’S AN INSTRUMENT YOU WISH YOU COULD PLAY?
TD: The piano!

TD: Charlie Brown by the Coasters

TD: Locally, I’d have to say, this past weekend at Hamtramck Music Fest, I saw VvisionsS play and was just floored.  A MUST have on your show!

CVh: WHO WERE YOUR MUSICAL INFLUENCES?

TD: American blues and 60’s rock/pop/psychedelia. Now it’s just a full blown love affair especially with what you can get with the premium streaming services.  I’m a Spotify guy.

CVh: HOW HAS MUSIC SHAPED YOUR LIFE AS A PERSON?

TD: It’s given me so much joy and music was like pure magic as a young child.  In my teenage years, it motivated me in sports, in college it sounded the best when I’d get high or do LSD and was a great teacher and mentor when listening

to certain lyrics.  I loved music so much that not even a stroke and paralysis could keep me away and now I feel like I’m that little child again seeing and hearing music with fresh ears and perspectives.

TD: Probably Scott Weiland from Stone Temple Pilots. I hear he was a jerk but love his lead vocals and approach to melody.

CVh: WHAT SONG DO YOU CRY TO IN THE SHOWER?
TD: Til I Die (Beach Boys)