Meditations on Music with Tony Pulice of Asphalt Flowers

On the Influence of Nature, Dreams, Memories, Experiences, Etc. 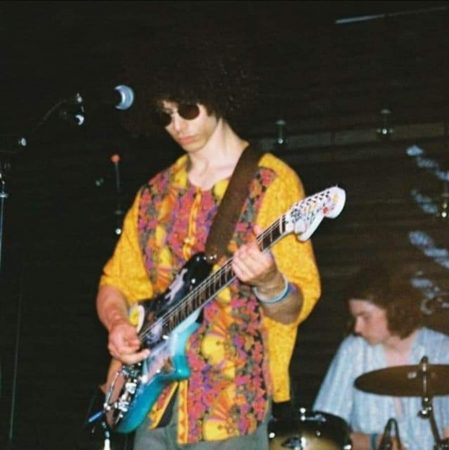 Tony Pulice wanted to be a writer as an adolescent, so he wrote short stories—later, poetry. At the age of 14, he picked up the bass from his bass player father. Six months later, he traded in the bass for a guitar and set his poems to music.

The rest isn’t history as much as it’s a story unfolding—over the next few years, he’d meet the musicians who would form the band, Asphalt Flowers. The band he plays in today.

I don’t ask Tony his age, but I have a feeling he’s younger than I imagine. There’s a sincerity about him that’s striking, rare. On a brief call, we talk astrology, meditation, and the energetic benefits of not drinking. Tony prefers cannabis—ask him for his brownie recipe. He won’t tell you.

He did, however, share many things during our brief call, answering all my questions with considered thought—bringing to mind a dear friend’s mantra: “You are all of the time how you are some of the time.”

Tony was raised Christian, a fact only worth noting because growing up in the church seems to be something that has shaped his meditative outlook. His mother ran music at his church—and he “still adheres to Christianity.” Although, for him, it’s more about “following Jesus” and his teachings than it is the institution of the church.

Which is to say, he’s someone grappling with the bigger issues at the beginning of what I hope is a long and fruitful career. One I am enthusiastically here for. As a veteran musician, Tony Muggs, of Detroit’s The Muggs, who invited Asphalt Flowers to play the Muggs upcoming vinyl release party at Cadieux Café.

This interview is, in fact, the direct result of my interview with Tony Muggs—whose simple praise for his fellow musician and band is more powerful than anything I can write:

“Oh, he’s a sweetheart. They’re all great guys. You know, I love a band that is sweet at what they do. Intelligent, super talented, and humble. But leave it on the cutting room floor. You know, they speak with their voices and their instrumentation, and it’s no posturing just all great songs…”

The following back and forth were conducted by email on a Saturday night. Because “you are all of the time how you are some of the time,” and Tony answers his emails promptly and thoughtfully.

CV HENRIETTE: HOW DO YOU LISTEN TO MUSIC ON YOUR PERSONAL TIME?

TONY PULICE: I rarely listen to music on my personal time because I like the quiet—but usually in the car or headphones

CVh: THE LAST ALBUM YOU LISTENED TO IN ITS ENTIRETY?

CVh: AFTER THE SHOW, LAFAYETTE OR AMERICAN CONEY ISLAND?

CVh: WHAT’S AN INSTRUMENT YOU WISH YOU COULD PLAY?

TP: Sometimes when I’m high, I feel lile one of those cartoons from the 1930s strollin‘ along in time with the music, so I’d say that stuff is my theme music.

TP: A tie between Dead and Company and George Clinton.

CVh: WHO ARE YOUR MUSICAL INFLUENCES?

CVh: HOW HAS MUSIC SHAPED YOUR LIFE AS A PERSON?

TP: Music has brought out the best in me. Being involved in Asphalt Flowers (as well as a new group, Dream Shoppe) motivates and inspires me constantly to become a better friend, thinker, composer, singer, guitarist/bassist—to live healthy, to learn new instruments, and to remain always in a state of spiritual awareness

TP: I don’t have headphone-only music.

CVh: WHAT SONG DO YOU CRY TO IN THE SHOWER?

TP: I don’t listen to music in the shower.

TP: I could take or leave Motown and garage, never heard much techno at all.