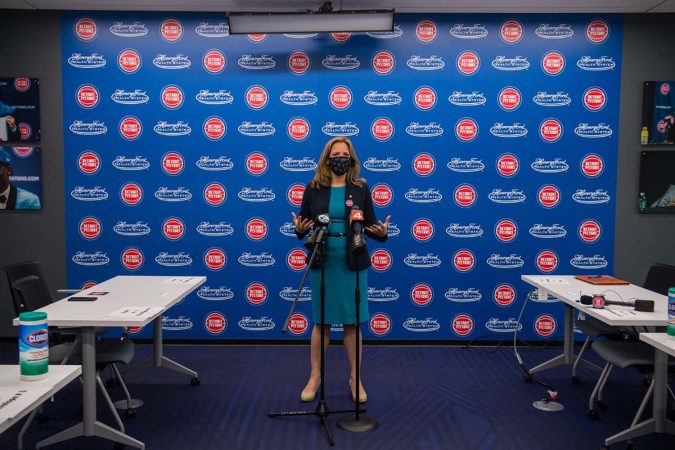 As the months leading up to the November election begin to wane, Detroit sports teams have partnered with Secretary of State Jocelyn Benson‘s office to boost voter turnout and offer facilities as voting locations. Both the Detroit Pistons and the Detroit Lions have announced partnerships over the past few weeks aimed at boosting turnout and educating individuals on the importance of exercising one’s right to vote.

The Detroit Pistons were the first Detroit sports team to announce a partnership with the SOS in July. As part of the deal, all Michigan residents will be able to use the Henry Ford Detroit Pistons Performance Center in Detroit as a “satellite center” where voters may register and learn more about the election, as well as vote in the facility on November 3.

The team will also use employees, players and coaches to work election days, create short videos and volunteer throughout the Detroit community promoting voting. A few videos have already been created using former players, which will be used to share and promote the importance of the upcoming election.

“You hear the cliche, that this election is going to be the most important election of our lifetime and I think that’s true,” shares former Piston and former Detroit Mayor, Dave Bing, in a PSA video created by the team. “I have not only children but I got grandkids who now are of voting age and we have discussions about what their responsibility is in terms of voting. It’s so important because this is the opportunity where I think we’re gonna see significant changes that are gonna change the trajectory of this country for the years to come.”

On top of efforts to drive turnout and promote the vote, the Pistons have also integrated a voter registration section into the Pistons.com website. The page serves as hub featuring information such as how to register, as well as testimonials like Bing’s in which familiar faces express their thoughts about the importance of elections.

The second Detroit sports team to commit time and effort to promote the election is the Detroit Lions, who announced August 25, that they would be acting in a similar role to the Pistons.

“We all desire real and lasting social change, racial healing, abundant opportunity for all and meaningful social justice progress in many aspects of our democracy,” shared Detroit Lions Principal Owner and Team Chairman Sheila Ford Hamp with her husband Steve Hamp in a press release put out by the team. “For this to happen, for our democracy to be responsive and to improve, we all need to register to vote, learn about the candidates who are running for office and then cast our votes in person or by absentee ballot. Our democracy is an inspiring and noble enterprise, but it is not perfect. It’s time to fix that.”

As part of the partnership with the SOS, the Detroit Lions will host receiving boards at Ford Field for the November 3 election, volunteer employees to work the polls on election night and create PSA videos similar to the ones made by the Detroit Pistons. Coming as part of the larger RISE to Vote and the NFL Votes initiative, the efforts will be part of the larger Detroit Lions Inspire Change program that was established in 2018.

“I am so proud that the Detroit Lions are the first NFL team in the country to announce their plans to dedicate their arena, staff and other resources to support our elections,” shared Secretary of State Benson in the Lions press release. “Their leadership comes at a crucial time for our democracy and will fill critical needs for our voters and the City of Detroit.”

With only a few months until November, ensuring you’re prepared to vote is essential. To make sure you’re registered, be sure to check our guide and to vote in-person or through the mail by November 3.