E-bikes Make Exploring the City Even More Exciting. Slow Roll Takes Us For a Ride

Jason Hall Changed the Way We See the City. Now He’s Shaping the Way We Experience it With RiDetroit 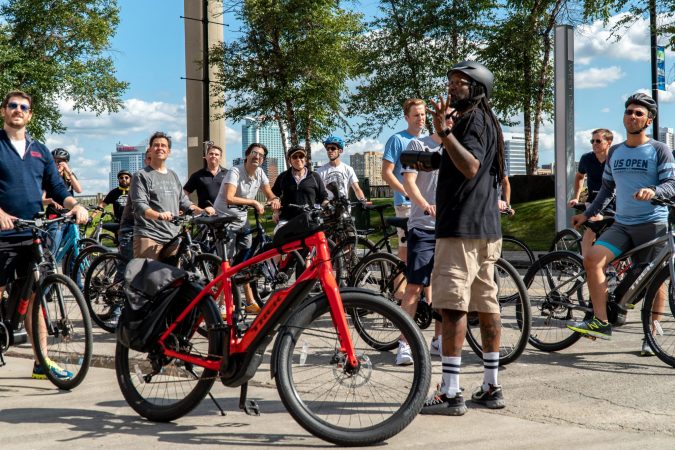 Before he set out to shape the city experience with e-bikes, Jason Hall started a bike ride called Slow Roll, where about 40 people joined him each week to bike the city of Detroit.

Fast forward eight years and turnout for his weekly bike ride had surpassed 1,000 and Homeland Security was now tagging along for the ride. A group that large is no longer considered a group of friends. Now it’s a soft target.

The hardest part of any project is knowing when to step away, but at some point, it becomes obvious that the work here is done.

The work, in this case, being complicated and multifaceted but distilled into a simple sentence: to get people interested in Detroit and in bikes, rather in biking.

This is the gift of hindsight.

In the beginning, Jason didn’t describe himself as a bike activist. Nor was biking his sole mode of transportation—like most kids in Detroit, he admits “it was cool to be on a bike until I turned 16, then a car came into my periphery.”

As an adult, he enjoyed riding with friends, and while he knew he “always wanted to do things to bring people together, to make a change,” he had no idea Slow Roll would be one of those things.

Every Monday evening at the Woodbridge Tavern, a small group of friends met up for a bike ride to explore the City of Detroit. This bike club, Bikes and Murder, was named after two loves: bikes and video games. It was also the name of the t-shirt company he co-founded with Slow Roll comrade, Mike MacCool, and the thing that would evolve into Slow Roll.

“We got lucky,” Jason recalls, “We started Slow Roll for ourselves.”

It was a friend who showed him what he’d built.

“He said ‘Jason, you don’t really know the power you guys have. People come down to Slow Roll and you can show them whatever you want. They’re not here to do anything specific. They’re here to follow you.”

For Jason and his friends, this new responsibility meant showing the outside world their world. Early bike rides focused on ending at their favorite restaurants and dance parties. Suddenly he had a way to help struggling restaurant friends, by showing up with 100 or more customers.

As the ride grew, the energy shifted from showing people around his home city to harnessing the power of numbers to organize cleanups. 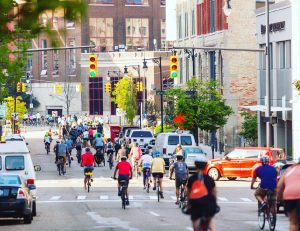 Let’s remember Detroit that looked and felt different in 2010 then it does today.

Jason and his friends were riding around town before the bankruptcy, before Gilbert, before the bike lanes on Michigan Ave that some people still confuse for extra parking spaces. This was a time when the most interested outsiders seemed to be a handful of French artists. Your uncle from the suburbs definitely wasn’t coming downtown to peddle-pub on the weekend.

In the time it took Slow Roll to go from zero to one thousand, the conversation in Detroit had shifted from how do we bring people in and show them a good time to how are we getting around?  Words like ‘mobility’ and ‘autonomous’ are now as ubiquitous as the QLine and co-working spaces.

This is a good thing because for the new loft dwellers, lacking access to convenient parking spaces aside, this city has been struggling with the transportation conundrum for decades. People not driving in the Motor City isn’t new, it’s just that now it’s being talked about louder and more often than ever.

After stepping away from a ride he organized for over a half a decade, Jason’s life is still devoted to biking, but the emphasis has shifted from recreation to access, primarily through a new kind of bike, the e-bike or electric bike.

In parts of Europe people have been utilizing e-bikes for years to get to work, buy groceries, take their kids to school, etc. As Mobility steps to the forefront of the conversation in many American cities, including Detroit, these bikes are quickly gaining popularity.

And Jason has become a sort of evangelist for them—the person who used a bike ride as a tool to change the way people see Detroit is now using e-bikes to expand the way people think about and use bikes in their personal lives.

But what’s wrong with a regular bike? Jason too had his doubts about going electric, until he started to listen to people’s stories, specifically one from a 70-year-old mountain biker.

“I asked this guy why he had a full-suspension mountain bike, and he said, ‘So I can live. I haven’t ridden a bike in 20 years until I got this bike. Now I ride my bike all the time with forty–year–old people. I can keep up with them now. It doesn’t bother me. My confidence level is back.’”

Essentially an e-bike is a bike that you plug into the wall. It is nothing like a moped or a motorcycle. It doesn’t reach the same speeds and it doesn’t take gas. An e-bike requires as much energy as a small household appliance. Like a vacuum.

When charged it contains a small motor that assists with your pedaling. It doesn’t pedal for you.

But it can help you. And that’s huge.

As we see with the mountain biker, this help can mean the difference between riding and not riding a bike. Jason also sites his own mother as an example, who is also now riding with him for the first time in years.

This help can mean the difference between an obligatory commute for groceries being a burden to becoming an easy adventure. Ditto with your ride to work, where assist means not having to bring a change of clothes to the job because you’re drenched in sweat from all that work you did just to get to work. 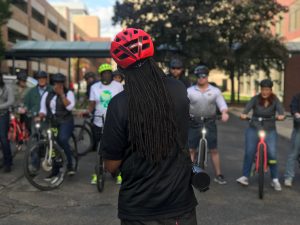 It can also mean safety.

“The best way,” Jason says “to stay safe on the streets of Detroit is to go 18 miles an hour. If you’re going 18 miles an hour on any bike no dog can catch you, no human can keep up with you on foot. An e-bikes top speed is 20mph. Some go up to 28.”

Through a partnership with Electric Ave Bikes by American Cycle and Fitness and his new business RiDetroit, he’s still getting people to bike around the city: only now he seems more concerned with using the opportunity to empower individuals by through the act of riding, as he is showing them the sites.

“Whenever I do a tour or take people on an e-bike, the first thing I do is take them the furthest I think they could ever go.”

A trip through a historic neighborhood like Palmer Park is exciting, but what’s more exciting is showing someone they can make the ten-mile trip in 20 minutes.

What next? Stop by Electric Avenue Bikes in Midtown to take one for a test or visit ridetroit.com to sign up for a ride with Jason.