Have You Visited Your Greenways Lately?

Greenways Have a Place in a City. But What Are They Exactly? 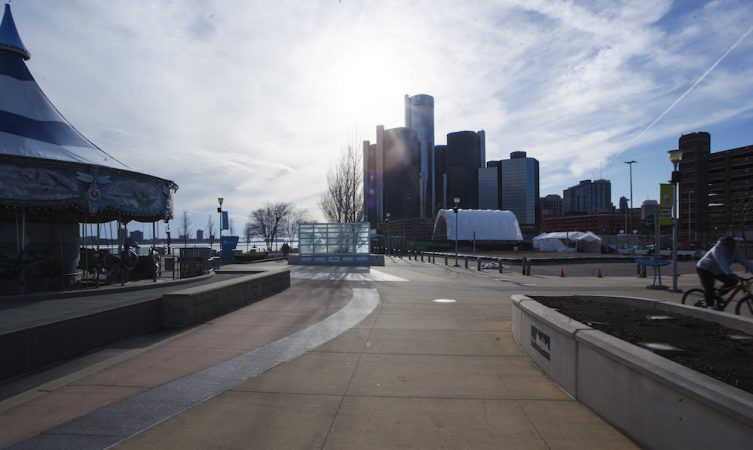 Last December I took a walk along what will be the Belt Line Greenway following the old rail corridor that served the Packard Plant and Frederick Stearns Pharmaceutical Company on Jefferson. Patrick Crouch from Earthworks Urban Farm led me on the expedition to check out some of the stranger sights. These included a large ball of congealed slag of uncertain origin. It’s hollowed out on one side to form a makeshift fireplace that’s used by the workers at a local fabrication shop as a hangout area. Supposedly when the fire has been going for several hours, the whole pile begins to glow.

Crouch also took me to a rail switching yard, once running eight trains deep. The bollards that served as a backstop for the trains that rose up to create monoliths of considerable size and the yellow leaves of Norway maples covered the ground. Various bits of this concrete infrastructure had been moved around for some reason, creating a small canyon that served as a vernal pool for frogs. Crouch told me that he found morels in the area, another strange quirk to a landscape that was home to ring-necked pheasants and wild raspberries, belying its image as “vacant” land.

Right now Detroit has a number of greenway initiatives in the works in addition to completed greenways like the Dequindre Cut, Conner Creek Greenway, and Detroit Riverfront. What exactly constitutes a “greenway” is somewhat nebulous, but according to Charles Little in his influential book Greenways for America, it can include hiking and biking paths, wildlife corridors, urban riversides, and scenic and historic routes. Detroit’s actual and proposed greenways seem to lean heavily in the direction of providing corridors for walking and biking. As the Detroit Greenways Coalition 50 Year Plan states, “It is a shared vision for a network of first-class greenways that provide nonstop bicycle travel across the city of Detroit.” Perhaps resources like the ones on display at the Belt Line Greenway can help expand our idea of these spaces to create an awareness of the city’s history and environment and turn greenways into places worth visiting for their own sake and not just thoroughfares.

Todd Scott, from the Detroit Greenways Coalition, has been working since 2008 to push for bike lanes and greenways in the city. He encountered little enthusiasm among city planners at first. However, that is changing with the success of the Dequindre Cut, the Detroit Riverfront, and biking events such as Slow Roll and Tour de Troit.

GREENWAYS AFFECT THE COMMUNITIES THEY MOVE THROUGH

“There’s just so many ways these greenways positively affect the communities they go through,” Scott says. “We’ve seen a lot of examples of people who’ve gotten so much healthier just by riding their bike or walking more … There are people who didn’t have much social life or much interaction with others until they started getting involved in bike clubs and walking groups.” Scott also points to the sense of social cohesion fostered by greenways where people of different racial and socio-economic backgrounds come together.

This democratic idea has been a goal of park planners going back at least to Frederick Law Olmsted, but it could be that greenways–where people literally circulate through the city–could accomplish this better than many public spaces.

Members of the Greenways Coalition also see greenways increasing access to jobs, grocery stores, and other opportunities in a city with poor public transportation and extremely high car ownership costs, while also helping teenagers, the elderly and those who are underserved by an auto-centric culture. These goals coincide with Mayor Mike Duggan’s stated aim of creating “20-minute neighborhoods” where people can walk or bike to everything they need–aside from work–within twenty minutes.

Imagine Detroit becoming a world-class city for bikes and greenways.

Scott believes the city has the resources to see that through. Detroit has wide streets, abandoned rail corridors, and vacant lots. However, staying one step ahead of development can be a challenge, “the possibilities of creative land use come up against the realities of underdevelopment and the lack of safety that comes with not having “eyes on the street” or in this case, greenway,” as Scott puts it. “Of course, the problem is that once the area begins to develop, it could become much harder to put this infrastructure in place.” As much as possible, the Greenway Coalition is trying to secure land and carve up roadways before increasing traffic or development gets in their way.

Some people may not see this as an issue, considering Detroit’s famously declining population since the 1950s. However, population loss has slowed to its lowest number in years and the neighborhoods in and around downtown have been growing. Getting greenways in place now could be important for taking advantage of a unique opportunity to set land aside for green development and public use. It could also be a way to preserve Detroit’s history and character.

SUCCESSFUL EXAMPLES OF GREENWAYS IN OTHER CITIES

Detroit would be following the example of other successful projects. Both Scott and Alexa Bush from the city’s planning department mentioned the Atlanta Beltline project as a useful model for Detroit. This 33-mile system of multi-use trails goes through and around the city center and has been frequently identified as a driver of development. Much like Detroit’s greenways, it makes use of abandoned rail-corridors. Scott also mentioned the Midtown Greenway in Minneapolis that runs below grade like the Dequindre Cut and is especially popular for commuters.

Like the abandoned rail yard on the Belt Line Greenway, Detroit possesses many markers of its industrial past.

Although some of this infrastructure has been presented or dismissed as “ruin-porn,” it can serve as an interesting history lesson when given a context. It can also be an evocative counterpoint to a natural landscape.

Scott talked about the original Ford Model T plant that will be on view from the Inner Circle Greenway which circles the center of the city passing through downtown, Hamtramck, Highland Park, and Dearborn, one of a number of automotive historical sites that will be on the route. “You can go on a 26-mile tour,” Scott says, “and learn about the automotive industry and the creation of the middle class and the great migration.”

If one aspect of greenways seems underdeveloped in the work of the Detroit Greenways Coalition or other discussions, it might be the role that these spaces can serve as natural areas, wildlife corridors, and open spaces for city residents. With a number of areas in Detroit underserved by parks and green spaces according to the recent Detroit Public Parks Plan, a system of greenways would seem to be one way to bring quality open space to the people, provided there are enough greenways and they are wide enough. As my walk on the Belt Line Greenway showed me, even a small strip of land can become completely engrossing when it speaks to the nature and history of a place.