For Detroiters, Voting is Made Easier Through a Partnership with the Detroit Pistons 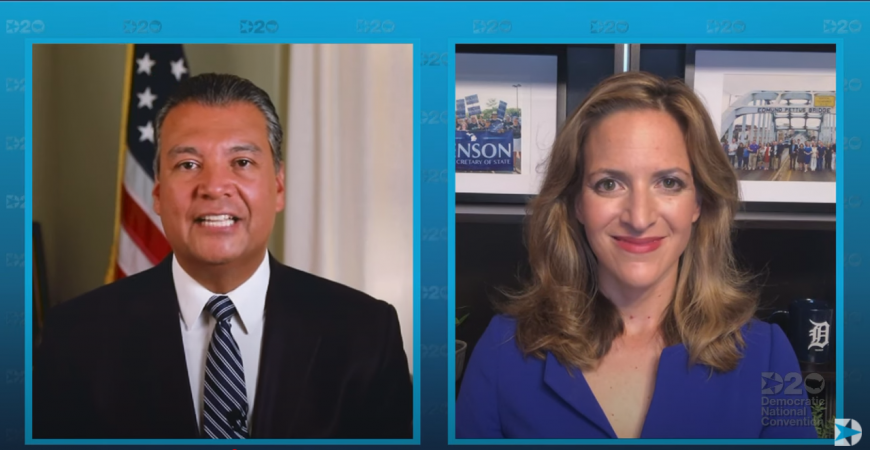 Michigan Secretary of State Jocelyn Benson made an appearance on the 2020 Democratic Convention livestream where she further stressed the importance of getting out to vote either in person or by mail-in/absentee ballots. Benson’s short speech comes as she continues to push for expanded mail-in voting amid the ongoing pandemic.

“Secretaries of State are responsible for running fair, accessible, secure elections where every vote is counted and every voice is heard. We serve on the front lines defending our democracy against any attacks, foreign and domestic,” shared Benson in her opening remarks alongside California Secretary of State Alex Padilla.

Both Padilla and Benson have advocated heavily for mail-in voting in the past, so their brief joint speech was used as an opportunity to further boost turnout in November. The duo showed strong support for Joe Biden and Kamala Harris, while also urging as many people as possible to vote through any means possible.

Adding to Padilla’s comments, Banson shared, “And there’s more. Once you’ve done that, talk to your friends and neighbors, spread the word tell everyone you know, to text “Vote” 230330 for more voting options. If you’re planning to vote from home, request and return your ballot early and remind everyone you know, to make a plan to vote.”

For Detroiters looking to get out the vote, Benson’s office and the Detroit Pistons have partnered to utilize the team’s Henry Ford Detroit Pistons Performance Center in Detroit as a “satellite center” where residents may register and vote on site. On top of utilizing their center as a voting location, the Pistons have also devoted a section of their website to voter advocacy.

Since announcing the partnership back in July, the Pistons have worked alongside Secretary Benson and Detroit City Clerk Janice Winfrey to host live voter registration and education events aimed at ensuring everyone knows the voting process, create PSA videos utilizing players and coaches, as well as provide Detroit Pistons employees to work the polls on election day. The Henry Ford Detroit Pistons Performance Center, which previously hosted the August 4 elections, also allows for individuals to register in-person on the day of an election.

With only a few months until November, Benson’s urgent message to vote cannot be stressed enough. To ensure you’re registered, be sure to check our guide and to vote in-person or through the mail by November 3.