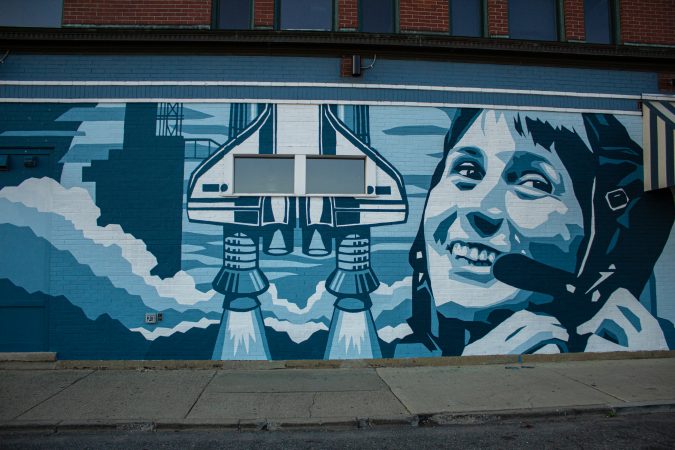 The mural has become the modern symbol of Eastern Market, adorning the historical buildings in colorful hues created by the city’s best artistic talent. But, it’s not every day that Detroit gets a mural painted in the same style as the painters used during the Italian Renaissance. That is, until, a collective of artists, a prominent astronaut, and the Italian Consolute office in Detroit came into play.

Last week, members of Detroit’s Italian community gathered in Eastern Market for the unveiling of its newest art piece, a mural created by artists Walter Contipelli and Alessandro Breveglieri, who hail from Milan Italy. Part of a collective of artists known as Orticanoodles, the group, is mainly known for its street art depicting iconic historical figures and social messages, a trend represented by the duo of artists in Detroit’s newest mural.

Commissioned by the Italian Consulate Office in Detroit, the two artists from the collective set up shop outside of Supino Pizzeria, Detroit’s now iconic pizza spot, ready to bring a piece of history to a region long known for its history with Italian culture. The former blue wall outside of Supino now bears a piece of art painted just as murals were centuries ago.

“The building is painted with a traditional technique, that is called Spolvero. It was invented by Michaelangelo during the Renaissance for painting walls,” said Walter Contipelli.

The walls in which Contipelli refers to are those of the Sistine Chapel, and the method, Invented by Michaelangelo, allows for painting from a unique vantage point.

“When you are painting in a strange position, it is very difficult to understand the proportional size, so we drew a sketch onto paper, and later we used the paper almost like a stencil to reproduce the image on the wall.” He continued, “We like to mix modern language with a traditional technique.”

Using this method of painting, the duo was able to quickly replicate an image of famous Italian astronaut, Samantha Cristoforett, in a matter of a few days.

Cristoforett, whose inspiring career is enshrined within the mural, is an Italian astronaut who holds the record for the longest uninterrupted spaceflight by a European astronaut, and who, up until 2017, held the record for the longest single space flight by a woman. Held in high regard for her accomplishments in a field of work long dominated by males, Orticanoodles hopes to use the image of the accomplished astronaut to promote a message of inclusiveness.

“It’s important because she’s [Cristoforett] an icon for everybody.” Said Contipelli.” “We painted the wall to use as a social message, and our message is inclusiveness for everybody.”

The duo, who had never been to Detroit prior to accepting the contract to paint the mural, fell in love with the city’s people, history, and culture.

“It’s [Eastern Market] a wonderful place, where a lot of people come during the weekend, and a lot of places here come from the Italian culture like Supino Pizza,” Contipelli stated. “Given this, we think it’s nice to have some recognizable Italian icons.”

The Mural of Cristoforett can be found just outside of Supino Pizza in Eastern Market and is a must-see for art lovers and history lovers alike. The mural is supported by Firm Real Estate.