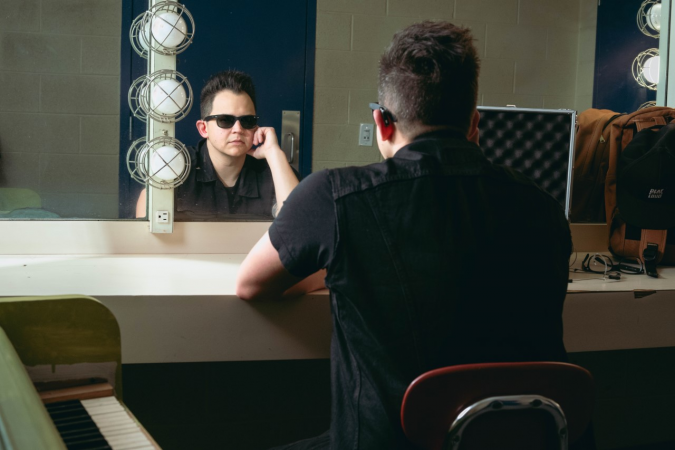 Sean Forbes is deaf, but he can hear better than most people. And that’s not a metaphor. The rapper started playing drums at age five, in a home where everyone played music.

“I guess for me growing up in a musical family was a blessing in many ways because, you know, my dad was very good friends with lots famous musicians. It wasn’t uncommon that Mitch Ryder, from Mitch Ryder and the Detroit Wheels, would be over at our house. And the Funk Brothers from Motown. Johnny “Bee” Badanjeck who is a famous drummer from the Detroit area—we always had musicians over at our house.

My dad would take me to many bands. I went to the Detroit Music Awards when I was 10 years old. Music is a huge part of my life.”

Maybe like every naïve person in the world, the idea of a deaf musician initially caught my attention. Once I saw him perform, it made me realize I know absolutely nothing about the Deaf Community. Which is embarrassing to admit, but important to share—and part of the reason Sean took up rapping in the first place.

“I always wanted to be a drummer for and foremost. I got my first drum set when I was five years old for Christmas. And you know, I always wanted to sit behind the kit in the thing and then as my musical aspiration went on, I realized more and more that I had more abilities than just playing drums—in this new record, I played drums in the majority of the songs.

But as someone that wants to make a difference in my community, the Deaf Community, I realized that I had to come out from behind the kit and be the frontman, so to speak—to create a voice for my community and be someone that can really show the world that people can really do anything.”

In his early twenties, Sean got a job working at the same recording studio where Eminem worked—a big opportunity for sure, but also a fated one. This is where he met a 15–year–old kid named Jake Bass, who is still his musical collaborator to this day.

It’s also where he would build the Deaf Professional Arts Network or D-PAN, the organization which has grown in tandem with his personal musical career.

“I got the opportunity of a lifetime to basically figure out how I could make music accessible for the deaf and hard of hearing community. And that introduced this opportunity to create D-PAN, the Deaf Professional Arts Network. And the goal of that was to make music and music culture accessible to the deaf and hard of hearing community, by taking popular songs and translating them into American language, using deaf performers on the screen and deaf production crew behind the camera.

Through those formative years, I happened to walk into a room and see a CD and the table that said ‘beats’ on it, and I did a big no-no, by taking the CD and leaving the studio with it.

This was at the time when Eminem was at his peak. There was always security all around—I was cool with all security guys, and they were cool with me. But I took that CD and I put it in my jacket, and I walked out of the studio and had no idea who’s CD it was. I came back a couple of days later, and I was like, “Who the fuck is this?” I want to meet this guy. Who is this guy? So they finally told me that it was Jake Bass. At the time I didn’t know if it was . . . or the Bass Brothers or Eminem himself making beats and putting it on there. When they told me it was this 15-year-old kid I was like, ‘I don’t care. I gotta meet him.’ We’ve been working together ever since then.”

My conversation with Forbes takes place in a back corner of a local news station. His publicist invited me to watch his late Saturday morning performance—”He’s not Jay Z,” he shares without provocation. The full band is there, including Jake on guitar, who I chat with briefly while Forbes takes an interview—during which he elicits genuine smiles from the newscaster.

When I ask him about his day, the first thing he says is it’s strange because he’s used to spending Saturday mornings with his wife and two kids. Watching him and the band perform, I feel like I’ve walked into a family reunion of solid musicians—it’s all on point, but most of all, everyone’s having a good time. There’s dancing and laughing and very darling selfies.

It’s not the most innovative music, but it’s catchy and well-composed. Like the publicist said, “he’s not Jay Z,” but that’s not the point. He’s a deaf rapper with a record deal, which considering all of music history, is a big deal.

After the performance, I ask Forbes how he feels the music, quickly realizing it’s the wrong question. The fact is Forbes hears. Just in a different way than me. There’s science to back that up. But listening to him describe it is better.

“I was out to eat with my parents a couple of weeks ago and we’re sitting at the table with my entire family, and all of a sudden I was rocking out to something. And you know, in the restaurant, it’s really loud and busy. I was like, ‘Yeah, guys, they’re playing Stevie Wonder.’ My parents looked at me. They couldn’t even hear it. They can’t hear it. They’re like ‘How is this possible? How are you able to hear?’

I think it’s because the way I experience music is I almost memorize drum patterns. I memorize baselines. It’s really the bass and the drums that become integrated into my being. Then I hear just a fraction of a baseline or just the way it’s played. I can know where it is in the song. I know what’s going on. I might not be able to hear the lyrics or anything, but I’ll start reciting the lyrics because I know where the rhythm pattern is in the song. It’s the weirdest thing.

If we’re in a mall, I can hear the music up above, and I’ll tell my brothers ‘Hey, do you hear Led Zeppelin playing?’ And they’re like, ‘What? I could barely hear that.’ So, I don’t know if I have a profound hearing loss or a superpower of some sorts that I’m able to hear certain things.”

Sean Forbes latest album, Tiny Victories, comes out tonight at midnight. Catch him live this Friday, February 21st, at Third Man Records. Doors open at 7pm. This is a free event, and all are welcome.