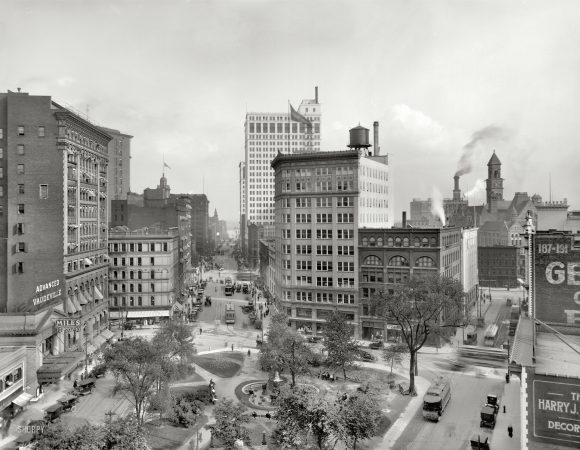 1217 Griswold sits in the heart of Detroit’s Capitol Park. It still does, but now it’s 1215 Griswold.

The last one ended in 2014 when Vice published the story “I’m Getting Evicted from Detroit’s Most Famous Techno Loft,” by Gustav Brovold and Andrew Roberts.

Throughout the 1990s and up until a few years ago, the building was famous for its artist’s residents and techno parties—skate ramps, music studios and a myriad other forms of creation and imagination.

The rents were cheap enough for that. Up until 2009, and perhaps later, one could rent a 2,300 sq ft loft for $500. Granted they came as dumps. But that was the excitement: artists transforming raw spaces for personal use and enjoyment.

In recent years the building has been renovated to accommodate luxury lofts and retail. In the same swath of buildings once traversed after-hours, now sits a nail bar playing romantic comedies for guests paying $50 for a gel manicure.

We’re not salty. Things change. Everyone needs a spa day.

But it’s nice to remember the past.

In 2008, when the buses still stopped in the park, Larry Mongo relaunched his private club as Cafe d’Mongo, with the help of 1217 residents. Some of these same residents helped “save” the Isaac Agree Downtown Synagogue, when, it was rumored, that it was in danger of being sold to the strip club across the street.

That was before the strip club burned down, to make way for more housing and burgers.

In reality, 1217 Griswold has always been 1215 Griswold—two entrances, two addresses—but its abrupt change in public status feels like an intentional cut from the past. Until the building changed hands in 2014, this was 1217 Griswold.

We’ll choose to see it as the retiring of a victor’s jersey: as Detroit takes its new shape, we pay homage to what was and honor the fact that a certain magic has been extinguished for good.