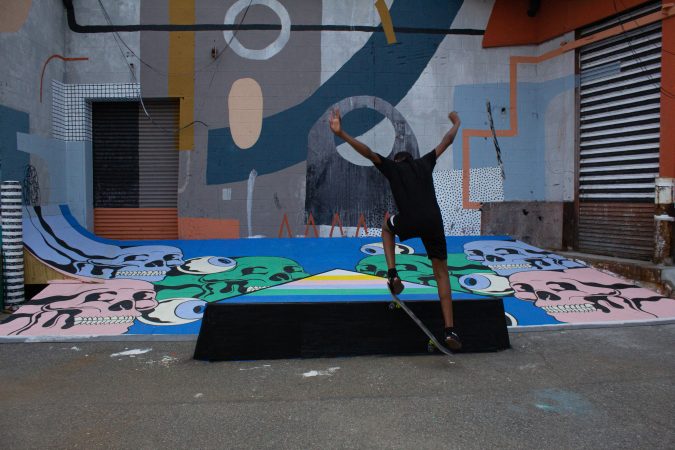 Detroit is no stranger to outdoor activities. You have the thousand-strong Slow Rolls that draw visitors from around the globe — and your fair share of 5K’s and running events. But, the city also has a flourishing skate culture with a slew of skate parks, and that culture was able to shine this week through a collaboration with Murals in the Market to open a temporary skate park.

Community Push, a community group of skaters committed to bringing the thrill of the vert and halfpipe to the Detroit Community, recently completed their second annual pop up skate park in an alley behind Red Bull Arts. The product of a close collaboration between the group and Red Bull, the Skate Alley skate park is a hidden gem in Eastern Market that builds off of an unused alley to create a fully functioning park.

Equipped with all the skating essentials from halfpipes to ramps, the equipment was set up around the indentations and spaces that make up the alley to create just the right industrial aesthetic that mixes well against a backdrop of art created by some of Detroit’s most accomplished muralists.

“We did this in the last year, and I can say I’d rather work in the space of an alley that has natural characteristics and features to work off of instead of just having a square to build what we want.” Said, Derrick Dykas, of Community Push. “It’s almost more fun with its imperfections.”

Making improvements to the design used during last years pop up, Community Push worked to create a space that would allow for more skating space while not cutting back on the overall creative design.

“We wanted to change it up a lot, last year the course, it looked cool, but it didn’t skate as well. Some of the stuff we made didn’t fit the space. So this year we wanted to make it more approachable,” said Dykas. “This year, we knew right away that it was better.”

The crowd on Monday night was a diverse group of Detroiters all attempting to try their skills on the ramps and jumps. Notable Detroit artist Illy Mack drew sharpie portraits of the attendees, while kids from the local neighborhood attempted to hit tricks with the help of skating tips provided by members of Community Push.

Open for the next few weeks, the Skate Alley skate park sticks to Community Push’s goal of creating a multifunctional, community-run, alternative recreation facility, and is another step closer to a permanent installation. Most importantly, it allows the people of Detroit the opportunity to skate in their own community.

“We want to see how people skate,” said, Dykas” “We made a lot of things so that there’s a number of different ways you can approach it, and we want to see how creative people can get with this space.”