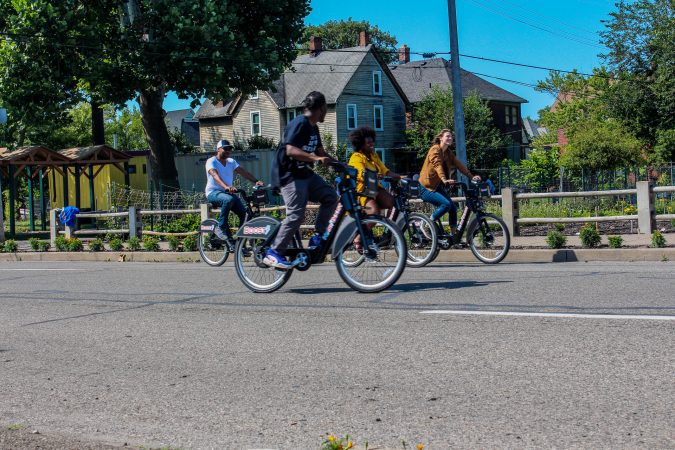 Life in today’s Detroit is reflected on its streets and sidewalks. The People Mover operates through a spirited city core. Cars and trucks clog intersections just as they did in the ’70s. You’d be hard-pressed to miss commuters and residents— tourists even—breezing along Woodward Avenue on electric scooters or e-bikes. They’re running errands, meeting friends at the city’s new hot spots, or finishing that last mile to and from work.

THE NEW FORD FUSION HYBRID IS A THIRD-GENERATION TEST VEHICLE THAT ARGO AI IS NOW DEPLOYING IN COLLABORATION WITH FORD.

It’s all part of a newly reinvigorated city that is also at the forefront of an innovative future, ebbing towards autonomous vehicle testing and mobility evolution. Self-driving buses shuttle employees from parking lots to their offices.

Ford Motor Co. is testing autonomous vehicles on city streets and creating a hub to develop, design and test mobility solutions in Corktown.

The Detroit Regional Chamber, state economic officials and other partners have created workspaces in downtown Detroit to help startups and businesses connect in the emerging mobility sector.

Self-driving vehicles are expected to improve the way we live, ease traffic congestion in urban areas, improve road safety, and free up some of our time. A fully autonomous future is not staring us down just yet, but bikes and e-scooters rented off apps are already changing the way many of us move in the downtown areas.

“I think for too long we have relied on the personal automobile as our main form of transportation,” said Lisa Nuszkowski, founder and executive director of MoGo, the city’s non-profit bike share system. “We have more things going in our regions and cities these days, more traffic and more congestion. Bike share is part of a larger ecosystem for people to use to get around, especially on shorter trips.” 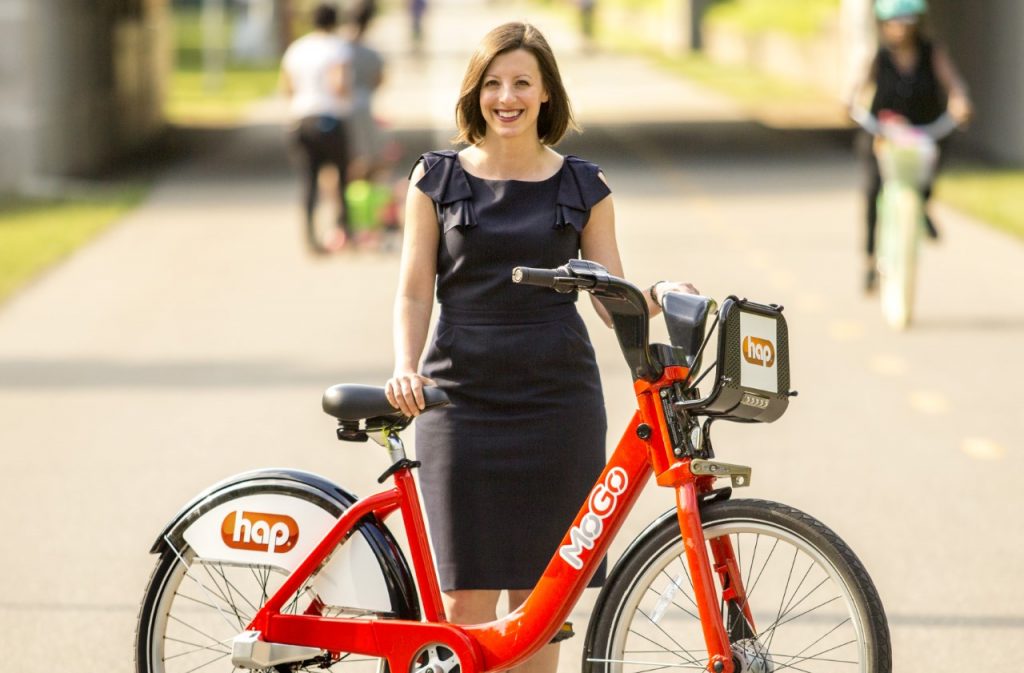 Bikes and bike culture in Detroit have long been around, even with private companies making bikes available to downtown employees for lunch or other mid-day breaks. It’s the bike-share systems that are a new development. MoGo launched on the streets of Detroit in the spring of 2017.

“We pride ourselves on being a convenient and reliable service,” Nuszkowski said. “There’s a greater than 99 percent chance of a bike being available anytime you go out to the stations. That kind of reliability is hard to find. When you need transportation, you need it. We are working hard to make certain the bikes are available when they’re needed.”

For many, bike-share systems and e-scooters are more accessible and convenient than other forms of transportation, public or otherwise, for short trips. A recent mobility monitoring study by global transport company Keolis found that multi-modal travel is becoming a part of daily life for many. More than 62 percent of the respondents use one mode of transportation for going somewhere and a different mode for going home. More than half use different modes of transport from one day to the next.

The study looked at the mobility habits of people living in different cities around the world, how they use new technologies and how digital technology impacts their mobility choices. These new forms of mobility include private car services, electric bikes, car-sharing, car-pooling, scooters and others.

E-scooters are an even newer addition to transporting civilians in cities than bike shares. In Detroit, three companies rent the two-wheeled devices—Bird, Lime and Spin. Unlike bikes, the e-scooters are dockless. Riders can pick them up and drop them off anywhere in the city. Detroit requires scooter companies to service neighborhoods to ensure equitable access. 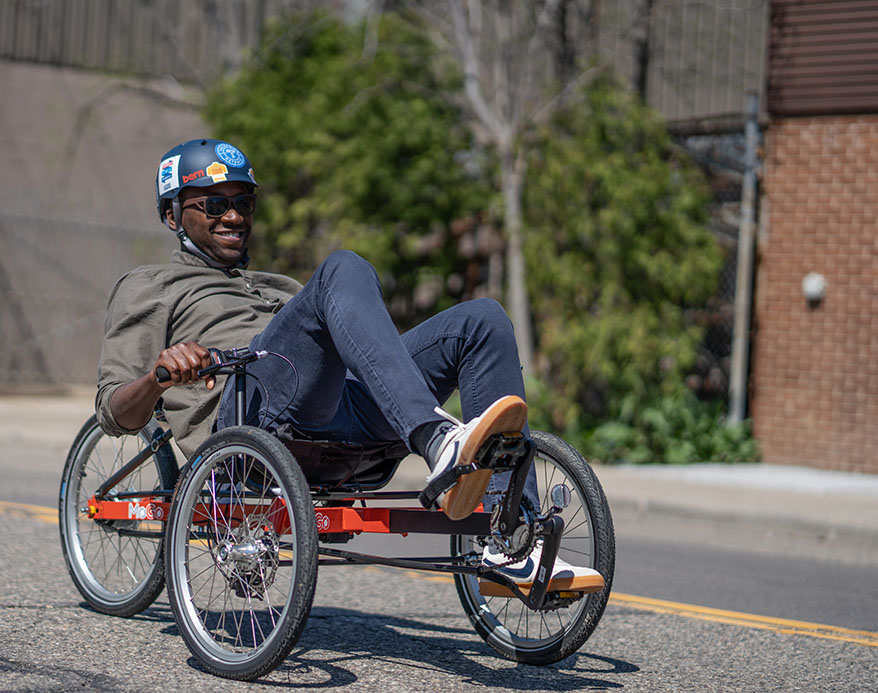 Like ride-share bikes, the e-scooters are rented through a smartphone app.

MoGo, however, is going the extra mile in providing accessibility to populations that aren’t in the immediate downtown sector, improving access to mobility. The company offers adaptive bikes, modified to meet the needs of individual riders. They include hand-powered tricycles and tandems, available from the Wheelhouse on the city’s River Walk.

In addition, this past summer, MoGo added 50 state-of-the-art electric, pedal-assist bikes to its bike-share fleet. Intuitive technology detects the amount of electric boost each rider needs while pedaling and adjusts accordingly to deliver a smooth, easy-riding experience. The bikes are jet black to distinguish them from the traditional rideshare bikes.

These e-bikes—called MoGo Boost—are expected to attract a wider range of riders in both age and interests. E-bikes, it turns out, tend to be used for longer trips than traditional bikes; the average e-bike ride is three miles, compared to 1.9 miles for a traditional bike rider, according to statistics shared by PeopleforBikes, a bicycle advocacy group that promotes greater bicycle use.

MoGo has also embraced those who have limited access to credit cards. Riders can pay cash to purchase Access Passes, which allow them 30 minutes of travel each outing, easily acquired from 7-Eleven, CVS and Family Dollar. Those customers receive a packet and an access key within a week in the mail.

“Our mission is to serve a wide range of people and needs through bike share,” Nuszkowski explained, noting 20 percent of MoGo riders hold the Access Pass. “It’s definitely a sign that it’s working in terms of making the system affordable to people.”

“We spent a lot of time really thinking about what has been learned in other cities, how we can avoid the same mistakes and provide the best system to serve Detroit,” Nuszkowski said. “We have put in the best practices from around the country and the world.”

The growing use of bike-share programs and e-scooters in Detroit and its surrounding areas have another benefit: a positive impact on the environment. Less time spent driving in a car, even for short trips, means a reduction in carbon dioxide and greenhouse emissions.

More people on bikes means cleaner air and a healthier environment, according to PeopleforBikes. Its website includes a slew of statistics on how greater bike use impacts the environment. Increasing trips made by bicycling and walking from 12 percent to 15 percent could lead to not only savings in fuel but reduce greenhouse gas emissions by 33 million tons a year, according to one of the studies cited by the group.

“I don’t think people are going to wholly abandon cars and trains,” Nuszkowski said, “but the bikes are filling an important need and can replace single-occupancy trips. I read an article recently that said 30 percent of all trips being taken are two miles or less.”

“As we reduce a percentage of trips and the time spent for driving, parking and sitting in traffic, we are reducing the amount of emissions,” she added. “It’s a greener choice.”