The East Riverfront Framework Plan Will Change the Look of Detroit 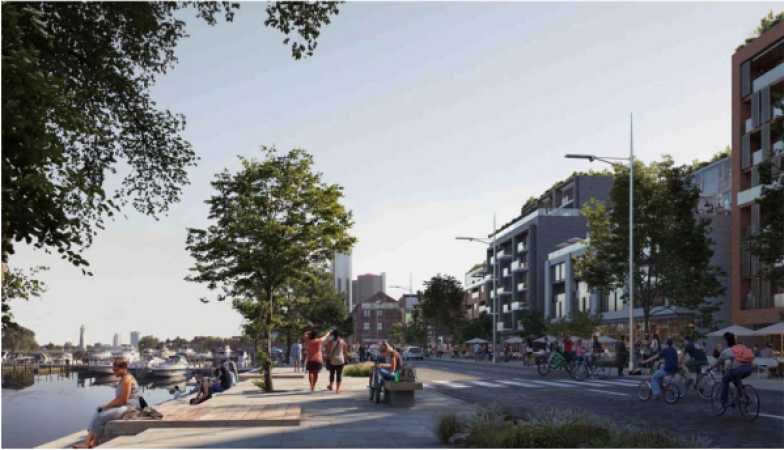 As one of our most anticipated city-changing projects, we want to take a moment to reflect on how the East Riverfront Framework Plan will impact the city. McIntosh Poris Associates has been working on urban design framework in the city of Detroit since the late 90s and is proud to announce winning the 2019 AIA National Honor Awards for Regional & Urban Design for the East Riverfront.

MPA, along with Skidmore, Owings & Merrill LLP, Detroit Riverfront Conservancy and other partners, developed a vision for a new generation of authentic Detroit neighborhoods, driven by the community stakeholders. Continuously building up and out, the 15-year plans unique approach will create compounded growth for this long underutilized neighborhood in a series of phases.

Built on an open-space framework the plan emphasizes nature and ecology through environmental restoration and the pursuit of healthy lifestyles. Nature becoming part of the urban fabric of the city. Implementation of the plan began in 2017 with the redesign of a section of Jefferson Ave and the development of the Joseph Campau Greenway – both creating a safer pedestrian and bike connection between the city and its waterfront. Harnessing city-specific strengths for urbanism, the plan meets the needs of Detroiters today while looking towards the broader transformative vision.

“The East Riverfront Framework Plan is unique in its incrementalism. We turned the notion of “make no small plans” completely upside-down because this plan is actually made of a series of small, interconnected plans – each reinforcing the next to create sustainable growth. The long-term objective of the plan is to build authentic neighbors along the riverfront and to make the riverfront a thriving, open public space in perpetuity. That is no small feat! And it would be impossibly costly if tackled all at once.

So, the structure of the plan very much comes out of economic need, but it is also built with the best interest of the community in mind, phasing in the stages of growth with community feedback is far more sustainable for the city. Step by step we build a new way of living in Detroit that is for everyone.

Implementation of the East Riverfront Framework Plan actually began in 2017 – we started with infrastructure improvements to start making the riverfront more accessible to the community. Creating temporary bike lanes and pedestrian ways that make traversing Jefferson Ave. and accessing the riverfront much safer. But we did not just add a few bike lanes – we added temporary bike lanes that will lead to permanent bike lanes and allow for flexibility as new types of transportation may emerge – so making a practical change that fills a need in the community now but also looks towards future development.

Today we are still in the initial phase of the plan, focused on the greenways that connect the neighborhoods to the riverfront – we all know the Dequindre Cut by now and can measure its success – but did you know about Joseph Campau Greenway? Long abandoned, we are reactivating it to connect east side neighborhoods with the river. And we are creating a third! Further North East, the Beltline Greenway will transform another abandoned rail line into a pedestrian and bike path. These developments are a big deal.

This is the first time in the entire history of Detroit that our international waterfront is open to the public rather than congested with industry or partitioned off into privately owned ribbon farms. This first stage of the Framework Plan opens up accessibility to pave the way for greater development, therefore, density along the riverfront and Jefferson Ave. There are over 20 million square feet of potential development along Jefferson.

And we thought of all the possibilities at our many community engagement sessions, the whole plan development process was very public – even the RFPs were presented on a public forum which is not common. All stakeholders were invited, residents, small business owners, representatives from GM and Stroh’s… everybody was encouraged to share their perspective… we would hold meetings, present plans, gather the feedback, make the edits and present all over again. This plan was built on Post-Its, emails and strong opinions!

The one thing that really stood out in our community meetings was the community’s love for Chene Park. We would have moved the park to make way for the continuation of the Riverwalk had we not gotten such a response from the community. After many meetings, we decided to leave the park as a vital part of the plan, we want the community to know we listen, we hear, we want this plan and the ensuing growth to be for the whole community because that is how you can change a city.

There is so much to come over the next 15 years and when MPA put together the team of architects, urban planners, landscape architects, community engagement specialists… we knew it was going to be huge. It is an absolute dream to develop a plan like this for the city and to win the AIA Honors Award, to have all our work be so well received and seen as exemplary is nothing short of amazing. I could not be more proud. But back to the boards, we still have at least a decade of development to go.”