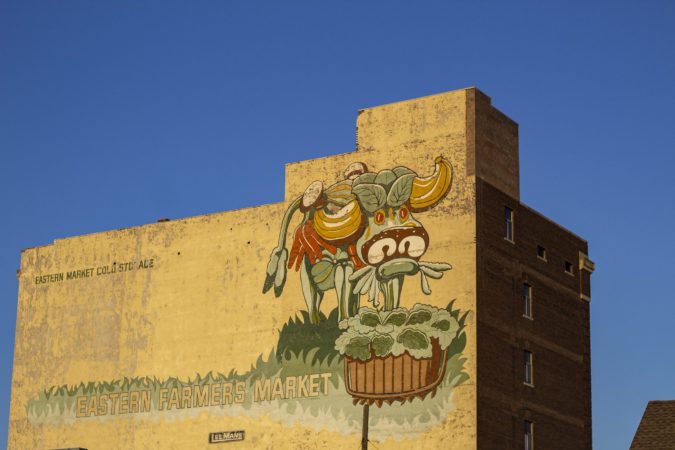 Since 2006, the Detroit Experience Factory has taken over 130,000 people on tours of the city. Looking to learn more about a specific region of Detroit? They’re basically experts. We sat down with DXF to pick their brain about one of Detroit’s most historic and sentimental locations, Eastern Market.

Detroit’s Eastern Market, one of Detroit’s oldest neighborhoods, its entire existence is filled with history, from its time as a central hub where all of Detroit would gather to sell goods in the late 1800s, to the modern-day, where the Market is known for its goods, but now has the added addition of great food and sporting events. No matter the changes that have taken place since it’s original inception, the Market’s importance to the well-being of the Detroit region continues to this very day, and it remains a gem for the whole of Metro Detroit.

From wholesale to bootlegging, here are some facts and interesting things we learned from our talk with DXF about Detroit’s favorite Market to shop in.

If there is one thing that almost everyone knows about Eastern Market, it’s the Art. Murals line the outside of buildings, big and tall, but they are not a new thing for the Market. In fact, Eastern Market has been an art hub for the city since the 1970s.

“We have the Art in the Market Walking Tour, which started after the first murals in the market about five years ago,” said Jeanette Pierce founder of Detroit Experience Factory. “Art was always part of the market, in the 1970’s they had this big mural program, and they redid a couple of them. Cost-plus wine, that’s the classic one they redid. Also, the artists and the artist spaces have always been a part, whether they’re open to the public or not.”

The mural trend that began in the 1970s never seems to have stopped, with Murals in the Market having hosted its 5th consecutive festival in 2019, new murals are ever-present. The Market also saw its first Art Park open in June of 2019, featuring art from Shades DET, as well as a new mural painted by Italian artists commissioned by the Italian Consulate Office in Detroit. 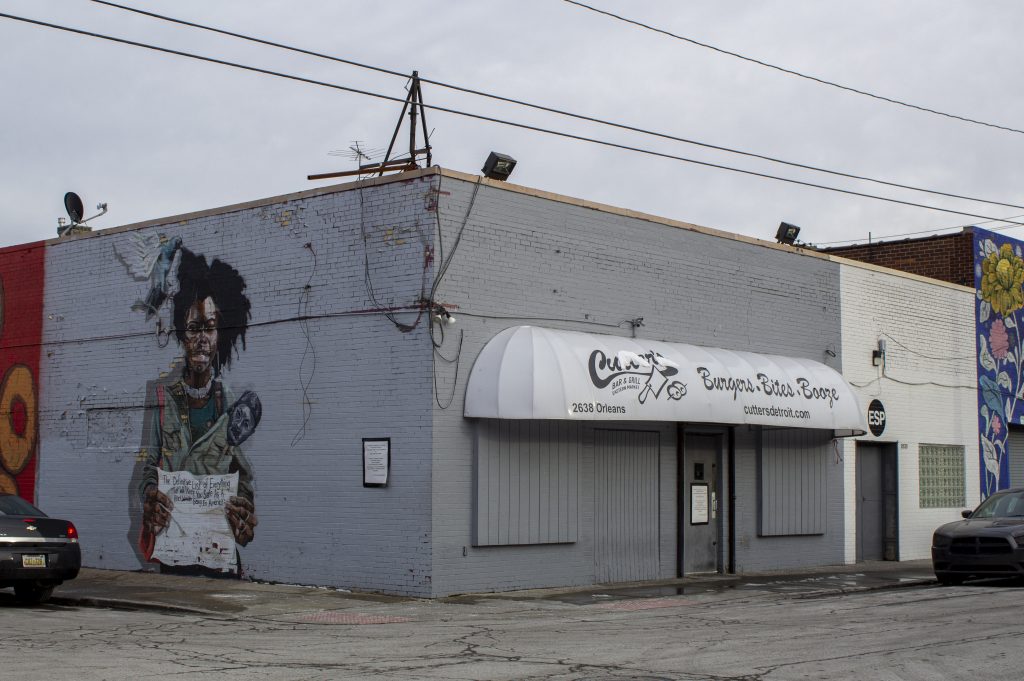 Food is one of the key reasons for what Eastern Market is today. If you want something to take the edge off after a night out, look no further than a Bloody Mary from Vivio’s, or if you want fresh Barbeque and live karaoke, you can head to Berts Warehouse Entertainment. New York Style Pizza served by the slice? Eastern Market has Supino Pizzeria

When taking groups through the Market, the food is something that Detroit Experience Factory almost always tries to highlight.

“Food is and should be the primary use of the Market, and I think that’s something Dan Carmady are really focused on,” said Pierce.

“We do bar tours, we’ve called them bar tours since day one instead of pub crawls, because it’s not about getting wasted and saying see you later, it’s a way to share the stories of small businesses and bars and restaurants, to show how walkable places are,” she added. “Eastern Market has a lot of great places, especially new ones coming, but one of our favorites is Cutters. If you think of the name, you may say that’s a funny name, but it’s a market, that [their name] has been a thing for a long time. They have amazing food, which a lot of people don’t necessarily realize because lots of people go there to drink.”

DXF has a running list of over 700 different bars and restaurants, of which a good amount can be found right in Eastern Market. If you’re looking to get a start and seeing trying everything on the list, you can print off one for yourself here. 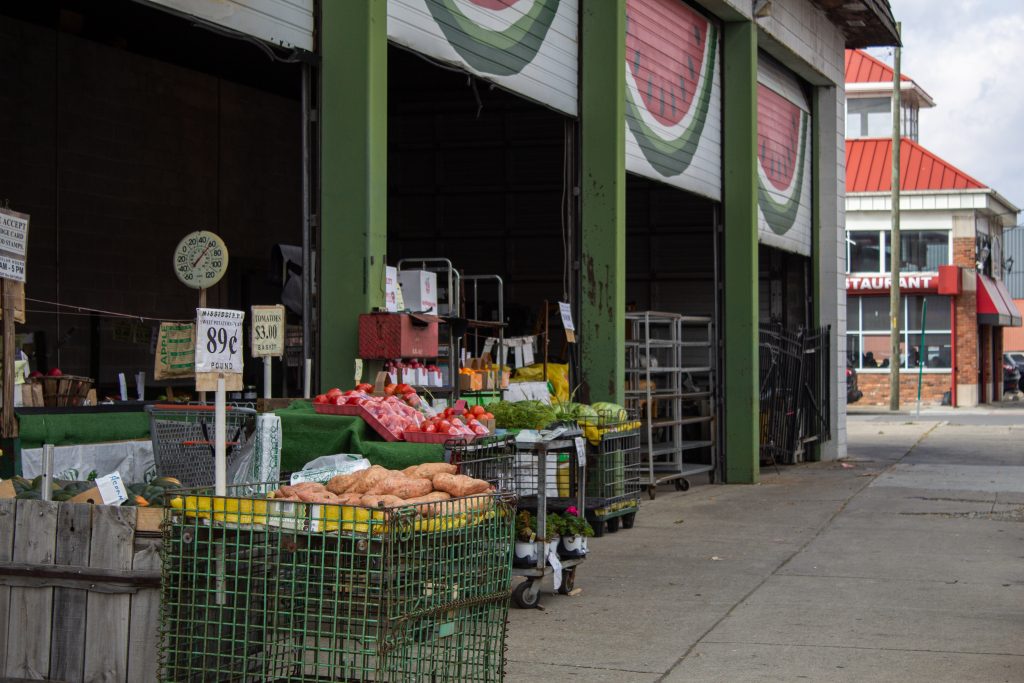 Way back when, Eastern Market was the spot where people came to buy just about anything. Today, many people shop for food and groceries from their local mega markets. But there is a chance that if they buy things such as meat or produce, it still came from Eastern Market.

“It’s actually open every day during warmer months from Midnight to 5 am, and that’s when the grocery stores do their grocery shopping, as I like to say. The grocery stores, restaurants, people buying in bulk, I always jokingly say, you don’t need a Costco membership, if you want to go buy a pallet of peaches, you can go at 3 am and door that,” Pierce added. “That part is what really sets it apart from other Markets.”

On top of wholesale produce, the Market is also home to a large some of the meat suppliers for Metro Detroit. Wolverine Packing Co. is now in its fourth generation of family ownership and has been operating since the 1930s to provide meat to the region. At the same time, Smith Meat Packing, Inc. has also called Eastern Market home since the 1940s.

The Wholesale Market is put on by The Eastern Market Partnership and offers a variety of goods that vary by season. Running midnight – 6 am at 2934 Russell Street, flowers can be bought from April-June, and wholesale produce is available June – November. 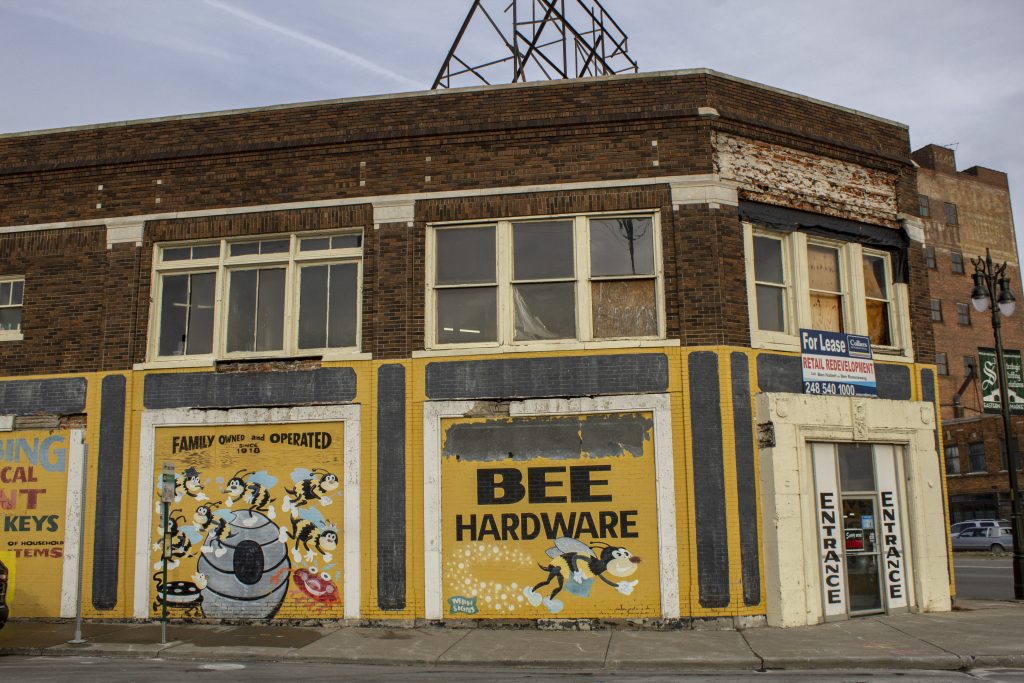 You can’t talk Eastern Market without talking history. Almost everyone today has heard of Western and Central Market – it’s known that Eastern Market was not the first market in the city of Detroit. Initially, there was the central market, which was located where present-day Cadillac Square is and was eventually moved due to it’s proximity to the city center.

According to Pierce, an aspect that is touched on during Halloween tours that pass through the Market was that Central Market was moved initially, due to the smell and congestion, outside of the city center. What makes it mentionable during the spooky season is that when it was moved eastward, it was placed on the spot that used to house multiple cemeteries, the very place that is the modern-day home of Eastern Market.

“There as a catholic and protestant cemetery, and they actually had to move the bodies to make room for the Market,” shared Pierce. “I can only imagine how that worked out, and more importantly how it didn’t work out when they realized it wasn’t completely successful when they put the highway in and found bodies.”

Another little known fact touched on briefly during the conversation, was about Busy Bee Hardware, distinctly the basement of the former hardware store, and a connection to bootlegging and the notorious Purple Gang.

“They [Busy Bee] had a story, and they would take you into the basement with one of the oldest elevators in the city and talk about the bootlegging and the Purple gang in Eastern Market, but we don’t do tons of things with those,’ shared Pierce. “They had said they built a maze down there so they could run from the cops and they knew which way to turn. That’s a fun small business kind of thing.”

Now, we cannot deny nor confirm the existence of tunnels in Eastern Market, but the idea adds an exciting aspect to the Market. The fact that you could potentially be walking above a maze of ancient tunnels while you head back to your car with your weekend groceries is a feeling we’re not going to live down.

These were just a few of the points talked about with Detroit Experience Factory, and there is still so much more to learn not just about Eastern Market, but Detroit as a whole. If you’re interested in learning more or taking a tour yourself, DXF offers a wide variety of tours ranging from custom walking tours to planned events in individual districts.