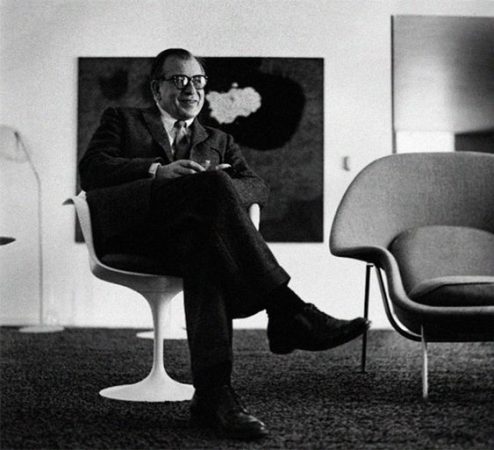 One of the world’s most famous architects is up next in this latest Detroitisit architectural design series. If you enjoyed diving into  Yamasaki’s evolutionary building designs and Albert-Kahn‘s iconic lineup of historical creations in our previous It Lists, then you’ll want to read into this next pivotal architect, Eero Saarinen’s life’s work. Detroit buildings are known to exude unique detail, but this designer behind some of the most iconic of them possess many intricacies!

Detroitisit rounded up a list of astounding Eero Saarinen accomplishments that will leave you with a new outlook on what’s possible, from yesterday, into the future.

Fame runs in the Saarinen family. Architect and industrial designer Eero Saarinen was born in Finland, the son of famed architect Eliel Saarinen, Eero moved to America with his family in 1923. He grew up in Bloomfield Hills, Michigan where his father co-founded and taught at the Cranbrook Academy of Art. Eliel Saarinen and his family moved to the United States in 1923 after winning 2nd place for his entry for the Tribune Tower in Chicago. They moved to Michigan in 1924, where Saarinen was a visiting professor at the University of Michigan’s school of architecture. 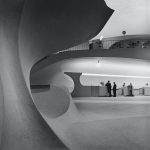 Though there are no buildings in Detroit designed by Eliel Saarinen, he made a mark on many well-known areas in the U.S. In 1924, Eliel and Eero were commissioned to create a plan for Detroit Civic Center, along the riverfront. Neither plan was adopted, although the 1941 plan had concepts that were later incorporated. Some of Eero’s greatest projects include, the TWA Flight Center at New York’s John F. Kennedy International Airport, the Gateway Arch in St. Louis, and Washington Dulles International Airport in Washington, D.C. Here’s a list of notable Saarinen architecture & design works to appreciate. 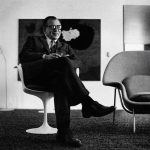 Eero was famously known for reworking to perfection. What better way to accommodate larger-than-life ideas than to build large models to properly peer into? He did this with buildings and his furniture designs. This resulted in hundreds of models and full-scale mock-ups to achieve the perfect curve and every intricate detail to please the eye. Saarinen’s organically-shaped furniture was mass-produced. The intriguing Knoll Womb chair and the Tulip series of chairs and tables were symbolic of the space age. Saarinen’s futuristic tables appear in Stanley Kubrick’s film 2001: A Space Odyssey. 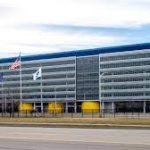 Eero Saarinen’s identity as a pioneer was developed during his first solo project, the glassy General Motors Technical Center, in Warren, Michigan. Constructed in 1956, the engineering building is a physical representation of Saarinen’s design legacy as a midcentury-modern icon. That same year, Eero landed on the cover of Time magazine. The campus featured furniture by some of Saarinen’s great contemporaries, such as Finn Juhl, who crafted the chair found in the GM head of design Harley Earl’s office. It was upholstered in fabric by Alexander Girard. 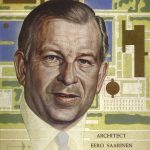 A year after appearing in Time Magazine, Saarinen was asked to be one of four judges to choose the winning entry for the international design competition for the Sydney Opera House in Australia. There were over 200 entries. Soon enough, other major American corporations were asking Eero to design their headquarters or corporate campuses. Eero accepted commissions from IBM, CBS, John Deere, Vassar College, MIT, Yale, The University of Pennsylvania, and the University of Chicago. 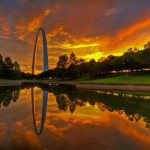 RIVERBOAT CRUISE IN MISSOURI, PHOTO ONLY IN YOUR STATE / PINTEREST

During the 1800s, a flood of pioneers paved their way through St. Louis. And so, the Jefferson National Expansion Memorial Association held a competition in 1947 to choose a design that would commemorate them. Eero and his father Eliel entered the competition, individually. The family rivals worked on their separate designs. Eliel celebrated his design victory, but then discovered three days later that there was a discrepancy in the telegram that had announced the winner. There was a mishap with the “E”, which meant Eero had actually won. The honor was given rightfully. This accomplishment was a pivotal moment in jumpstarting Eeros’ career with self-validation and independence from his father.

Eero was elected a Fellow of the American Institute of Architects in 1952, which awarded him a gold medal. Not to mention, he was also elected a member of the National Institute of Arts and Letters in 1954.