Where We Stand After 100 Days of Biden’s Presidency

Far From Historic, the First 100 Days of Biden’s Presidency Have Been a Welcome Change From Trump, but Pale Amid Talk of Massive Promises 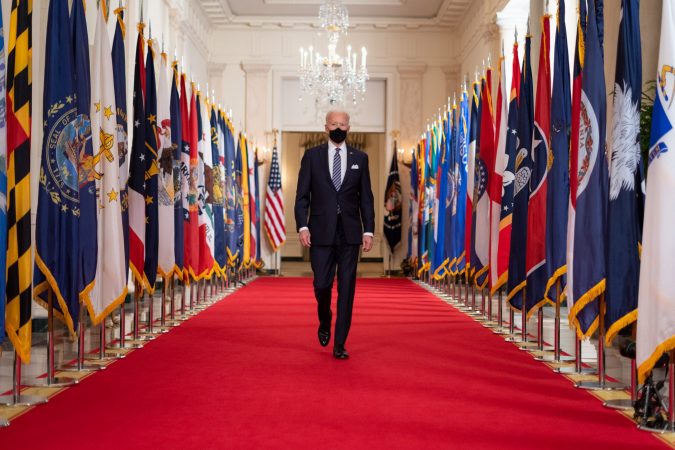 A buzz has remained about Joe Biden’s time in office, with comparisons to FDR’s New Deal and LBJ’s Great Society. 100 days after taking office, Biden’s tenure is a reliving change from the chaotic despotism of Trump — but in terms of historic, the president’s time has consisted of posed photos for social media with some action.

While it’s still too soon to define the Biden Presidency, the ongoing crisis with the coronavirus, gun violence, police violence, and right-wing extremism in the U.S. have provided Biden with conditions comparable to the crisis that rocked the world in the 1930s and 40s. But, with the Democratic Party having a poor performance record when approaching crisis as of late, it’s unclear whether the next three years will see Biden come close to the level of FDR. Which, for the sake of the country’s well-being, we should at least hope he does.

On a lighter note, the first 100 days of Biden’s time in office have not been a complete dud, and despite the ongoing crisis, there are some big things on his radar. But, there are also continuations of the past that are less than stellar and aspects where the president could have done better. Let’s break down the good, the bad, and the meh of Biden’s first 100 days.

Starting out on a more positive note, perhaps the biggest sigh of relief from Biden’s first 100 days is the fact that he at least approaches the Coronavirus crisis more seriously compared to his predecessor. Vaccines are more readily available, and the country did receive a decent — although less than originally promised — $1.9 trillion aid package, which delivered relief to struggling Americans.

While still failing to deliver on a promised mask mandate — which, if we’re honest, would not fly with many due to Trump and the right wings’ ongoing culture war around anything resembling pandemic precautions — Biden’s time at the helm has been a more welcome sight than Trump.

Another more positive aspect reflecting a somewhat more leftward nudge in the Biden administration is the ambitious infrastructure package proposed during his first 100 days. Massive in scope and really the first such legislation in recent memory, the package is, unfortunately, likely to change as the debate goes on. But, the progressive nature of the package and the fact that the Biden administration seeks feedback from progressive groups is at least a welcome change.

The infrastructure Bill also targets climate change, which, with the rejoining of the Paris Climate Accord, at least shows that Biden is somewhat listening to climate activists.

In light of an increase in gun violence, Biden also announced a series of actions aimed at addressing the second pandemic plaguing this country. Biden’s would tackle matters like “Ghost Guns,” establish some form of Red Flag Law and also invest in evidence-based community violence interventions.

After decades of carnage, Biden’s actions are sane while still avoiding infringement on the rights guaranteed through the second amendment.

Following the horrid voter suppression efforts in Georgia, Biden’s first 100 days also saw the introduction of the For the People Act, which aims to expand voting rights, change campaign finance laws, limit gerrymandering, and create new ethics standings for federal officeholders. The fact that such legislation is still needed in 2021 is appalling, to say the least, but the move from Biden is one that steps in the right direction.

Lastly — in a move that would be incredible if it were actually true — Biden made a promise that all U.S. troops would be leaving Afghanistan by September 11. Amazing, and something that needed to happen long ago, as someone who doesn’t remember a time without America’s forever wars, we won’t hold our breath that Biden will keep his word after Bush, Obama, and Trump all declared victory or announced a full withdrawal in some way shape or form.

A move that would be unbelievable, time will tell if Biden lives up to his foreign policy promise.

THE LESS THAN STELLAR MOMENTS

On the topic of foreign policy, like most administrations, this is where the Biden administration has remained most nefarious during his first 100 days. Instead of pushing for global peace and cooperation, Biden’s administration has already sparred with China during the first meeting between the two powers, allocated a needless $715 billion toward the military, and has continued American aggression the same as past administrations.

As was the same with Trump, and Obama before him, when looking at military aggression, it’s safe to say that under Biden, nobody will be asking how we will pay for the bloated, unnecessary military budget.

Striking similarities to Trump, Biden’s stance on the southern border is eerily similar. Despite initial promises of “securing values as a nation of immigrants,” migrants — many being children — still remain packed inside inhumane detention centers along the southern border.

With detentions rising, the crisis has been exaggerated by members of the right-wing, adding further fuel to the ongoing American culture war. Rather than working to address the root cause of why many migrants are fleeing their homes, Biden’s response remains more of the same, punitive measures that do more harm than good.

Stateside, as police violence and killings show no sign of stopping, Biden has done little to comment on the ongoing problem besides calling on protesters to remain peaceful in the face of unjust aggression by police forces in cities across the country. As the crisis reaches a dangerous crossroads, Biden needs to act, and not in a way that harms those demonstrating for justice.

At the end of the day, while Biden’s first 100 days have been mildly successful, there is much more work to be done to not only steer the country out of the many crises we find ourselves in but also to create a more just, peaceful environment for all people of the world. Time will tell if Biden truly is ready to live up to his historical comparisons.