Jewelry Designer and Entrepreneur in Her Core City Studio 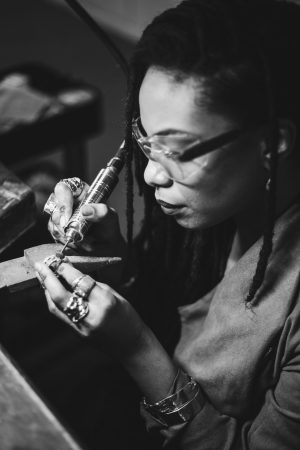 Karisma Yve is a Detroit based jewelry designer and entrepreneur whose line, Xenophora Objects, has taken her across the globe—garnering an origin story that reads like a novel: Russian collector walks into Paris hotel lobby with a 10k bag of cash and offers to buy first collection. A regular at Paris Fashion Week, her work is carried at Orleans and Winder and Linda Dresner.

She’s also helping others take their own designs to completion through her business Casting de Khrysopoeia.

We visited her studio and manufacturing facility in Core City to talk history and process.

CV Henriette: You’re from Detroit. Where in the city did you grow up?

CVh: Where did you go to High School?

KY: I went to a few. Detroit School of Arts (DSA) in Midtown, and then I went to Southfield Lathrup, which is where I graduated from.

CVh: You went to College for Creative Studies for fashion design?

KY: I went for crafts and was studying fibers. And dropped out six weeks later because I was already doing what I wanted to do. I was already in the industry—already showcasing my stuff during international fashion weeks. When I went in for a critique on some of my personal work the head of the department told me, “Karisma, you don’t need to be here.” So I took that and ran. She was right. I didn’t need to be there.

Even though I was on scholarship, I felt time and money was being wasted. That scholarship could go to someone trying to find themselves or that really needs the guidance that CCS offers. Taking my instructor’s advice I moved on and it was the best decision I ever made. I went straight to creating a brand, raising funds, and ultimately creating Detroit’s only full-service jewelry manufacturing facility and design house. That’s sort of crazy, and I don’t know if it would have ever happened if I stayed in school.

CVh: For your personal work, how did you get a head start?

KY: I was working on clothing. I was doing a remote, independent, study with a pattern maker by the name Shingo Sato.

I started a blazer, it had a very structural design and it needed buttons. I was seeing metal buttons. Specifically, sterling silver buttons. After a lot of research, I realized there was no resource for that. And there was not a casting house that would work with me. I didn’t know where to go or how to get started, so I did I made them myself, in my mother’s basement. At that point, I was sandcasting. With the help of a lot of books.

KY: I carved wax and did a two-part mold with casting sand . . .

It took me a million tries to get it right. But once I did, I was like “Oh, damn. I can do anything.”

From that point I was like “I’m going to try to make a ring. And then a pendant, And I’m going to all this other crazy shit.” I become obsessed with the casting process. It was this adrenalin rush that got me like nothing in this world can recreate or imitate. When I’m tired from working like crazy and I’m asking myself how to get my energy up—coffee? A nice espresso buzz, maybe. But, really, I just do a casting, and I’m revitalized.

CVh: And the blazer?

Each different stage that I’ve gone through—from CCS, Shingo Sato/making clothing, and then to the buttons—was a natural divine order of getting me to where I need to be, to my purpose.

CVh: Go deeper into casting and what it does for you? It is the birth of something new?

KY: You could put it in those terms, but, really, it’s the process. It’s the fact that I’m either holding a torch or turning on a machine to have inert nitrogen flow into the machine. It’s invigorating! And then there’s the anticipation of “is this going to work?” And It works. It’s the unveiling that’s the most satisfying.

It’s a selfish process. I’m getting better each time I do it—on a physical, physiological level, and a spiritual level. I’m building a world. I’m building myself, and I see that in each piece I’m making.

CVh: Not certain I would say this process is selfish. Most artists have studios where they often isolate to create a body of work. You’ve created space where you’re inviting others to not only show, but participate, in the process.

KY: I’m especially interested in building worlds and contributing to giving other people the access and platform to do the same. I learned how good I feel when I’m building my world—and I realized that’s not exclusive to me. It feels good when you’re building your world, whatever that world is, whatever it looks like.

My expertise just so happens to be in jewelry. And that’s from years and years of practice and patience and failure and successes—that’s where I am, and that’s the gift I have to offer. If someone, like me, has a dream to build a world through jewelry then I consider it my responsibility to be able to provide that access and be a resource for them. If they have an idea they want made and create a fully finished product or build a product line, they can develop it from concept to creation right here.  Going from a sketch to CAD to 3-D printing to casting to molding to stone setting.

Those are services we offer, but what we’re really offering is a platform to take control of your life and build your own world. It just happens to be through jewelry.

CVh: To be able to take something like jewelry making that is ubiquitous and out of grasp for most people is powerful. There’s nothing like this in the city.

KY: Manufacturing (jewelry) is a trade and an industry that has largely gone offshore. From that, you get poor working conditions, underpaid or unpaid workers, and pieces that are, often times poor quality due to the working conditions. How do you create something that’s meaningful and beautiful when the building over your head may come down at any given moment?

I don’t do that type of manufacturing. Casting de Khrysopoeia is a disruption to everything we know as manufacturing. There are very few jewelry manufacturers in the Metro Detroit area and when you reach out to talk about your idea with them, it’s usually through bulletproof glass. You do an exchange through a turnstile that’s also bulletproof. Is that considered creation?

For me the big question is how do I redefine the process of jewelry making? For my customers as well as for the people who interact with me.