Detroit Policy Conference 2021, What to Know: Past, Present, and Future Detroit 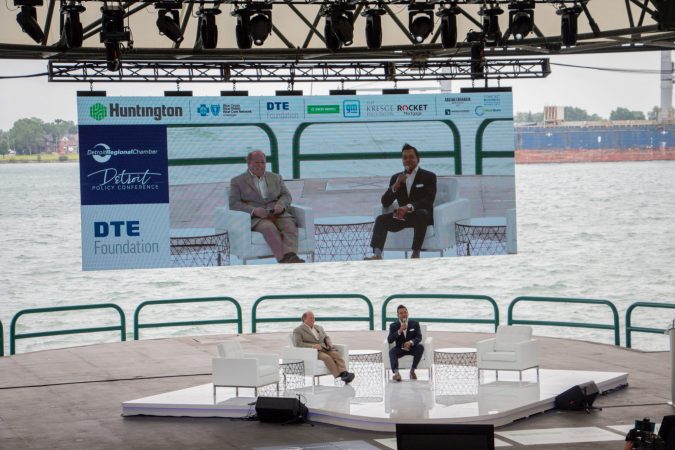 The 2021 Detroit Policy Conference was greeted by a grey July day at the Aretha Franklin Amphitheater this past Tuesday. The air whispered of chilly summer rain, but a hot cup of delicious cinnamon-infused coffee from Faust Haus Roasting Co. and a ubiquitous sense of being a part of the Detroit community once again warmed each attendee’s face.

The event was kicked off by Sandy K. Baruah, the President, and CEO of the Detroit Regional chamber. “Change doesn’t happen without a lot of people,” he said, after commenting on how thrilling it is to meet in person again in a safe and different way. He continued, thanking frontline workers, medical workers, and leaders who have done so much to keep us safe.

He then turned his focus towards the inequities and systemic racism that the pandemic shined a mirror on, “COVID impacted us all, but not equally,” he said, “…we have found more inequity and systemic racism [in this past year and a half] than we all would care to believe existed.”

Following Baruah, Dennis W. Archer Jr., the CEO of Ignition Media Group, Founding Partner of Archer Corporate Services, and Chairman of the 2021 Detroit Policy Conference, spoke the theme of this year’s Policy Conference, “Today’s theme is the future, the future of the city of Detroit. Our resurgence may have taken a detour but we definitely didn’t get all the way off track.

After Archer’s introduction, a pre-filmed Governor Whitmer discussed Michigan’s three main economic issues as we recover from the pandemic. “Jobs need higher wages to attract applicants, small businesses need capital to ramp up hiring and boost investment in internal operations, and childcare remains out of reach for many families with young children. They want to return to work, but they can’t.”

Governor Whitmer continued, discussing Michigan’s Economic Jumpstart Plan which will invest $1.4 Billion in the childcare industry, $20 thousand grants for small businesses to help with a mortgage, credit, taxes, payroll, and any other operating expenses. The Jumpstart Plan will also invest in helping people get well-paying, high skilled jobs and help to make sure businesses can meet their talent’s needs.

Lt. Governor Gilchrist spoke next, bringing forth the idea of innovation, but in ways that enact present change and take into account inequity. To this, he then defined the word innovation apart from its buzzword status, “Something is innovative if it has five characteristics. It’s new, it’s different, it’s better, it is more valuable to more people.” He continued, “so let’s innovate in the realms that matter.” 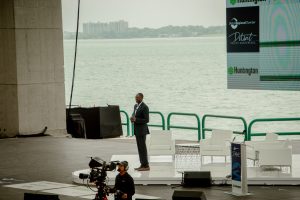 Gilchrist used examples of childcare: how entrepreneurship can bring innovation to spaces for the children of the working class, and environment: how innovation can aid cities like Detroit and diminish storms such as the one that caused Detroit’s most recent flood, to show how innovation can positively affect a community.

To this, Gilchrist offered a challenge of investment and innovation to every Detroiter, stating that there are more opportunities for change than ever before. As we invest and innovate, however, Gilchrist spoke to how forward movement should keep in mind diversity and equity.

As Gilchrist wrapped up his call to action, Archer returned to the stage and the two discussed Detroit’s recent flood, infrastructure dollars, the systemic changes of diversity and inclusion that need to be enacted, and COVID-19 vaccination numbers in Detroit being behind the state average.

Blue Cross Blue Shield’s Vice President, Bridget Hurd, spoke in-depth on the importance of understanding diversity and inclusion versus integration. Heard suggested that individuals be mindful and mitigate biases, learn about unconscious biases and check blind spots, accept that our actions have deep impacts on those around us and that individuals foster a culture of inclusion based on fairness, respect, value, and belonging in order to promote a safe and open workplace which is filled with empowerment and growth. 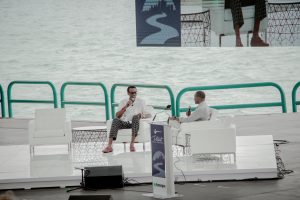 Dwane Casey the Head Coach of the Detroit Pistons spoke intensely of the importance of character. Those who start their day making their bed or doing small acts filled with purpose are set apart in their character by drive and intention.

Casey’s conversation with Pistons Television Analyst, Greg Kelser, then moved to the effects COVID-19 had on the Pistons. Casey stated that he caught COVID in March 2020, and “it got our attention,” he said. From then on, all the players were tested twice a day, even on non-practice or game days. This was in an effort to give sports lovers across the country a sense of normalcy throughout the pandemic. In a world of uncertainty, we could turn on our televisions and see our favorite sports teams playing and not feel quite as alone.

REGINA ANN CAMPBELL PRESIDENT AND CEO OF THE BUILD INSTITUTE: THE FUTURE OF SMALL BUSINESSES

Filled with flair and energy, Regina Ann Campbell took the stage and brought focus to small businesses in Detroit, and a hyper-focus on those founded by people of color and women. Small businesses are essential to Detroit, not just in Downtown and Midtown, but in every Detroit neighborhood, in every community pocket. She asked the crowd to imagine, just for a moment, a booming corridor in every city. That future would be amazing, wouldn’t it? But how do we get there?

Campbell offered a list of ways we each can aid small businesses: Buy and invest locally, adopt a business, speak with local business owners, advocate for community businesses, and work with the Build Institute.

MATTHEW CULLEN CHAIR OF DRFC: PAST AND FUTURE OF DETROIT RIVERFRONT

The past 20 years for Detroit’s riverfront have been ones of intense, beautiful, and welcoming change. Matthew Cullen, the chair of the Detroit Riverfront Conservancy (DRFC) spoke of how the DRFC’s mantra has really become “bring everybody,” as each new project enacted more traffic from both Detroit residents and those from out of town.

Cullen continued on into the present and stated that the riverfront has roughly 3.5 million users annually, and was named the best riverfront by USA Today this year. The next five years, Cullen said, are exciting and filled with groundbreaking spaces. “The future is now on a lot of this stuff,” he said, “We’ve already broken ground on some of them.”

Mayor Mike Duggan and moderator Roop Raj, Reporter and Co-Anchor of Fox 2 Detroit, covered a lot of subjects in their short conversation. Beginning with infrastructure, Duggan stated that there weren’t that many projects throughout the city that were brought to a halt during the pandemic. Their conversation then shifted to going back to work and the Delta COVID-19 variant. Duggan warned Detroiters to stay safe and get vaccinated, “This Delta variant is real,” he said.

As for future projects and investments, Duggan stated that he is very involved with GM, Ford, and Stellantis in an effort to bring as much revenue and opportunities as possible to the city. Raj then steered the conversation towards Duggan’s projects of blight removal and added greenspaces throughout Detroit neighborhoods. Duggan stated that 50 or 60 thousand abandoned or burned-out houses have been knocked down, and roughly 16 thousand lots have been sold to Detroit residents to utilize as personal or neighborhood greenspaces.

Duggan stated that both betterment of schools and the lowering of crime rates in the city is what he looks forward to working on if he is elected again next term.

For Anika Goss, the breakdown of inequity in Detroit began with a map covered in dots, the majority of which were blue and pink. The blue dots represented Black households, pink represented white, light blue represented Asian, green represented Hispanic, and orange represented Pacific Islander. According to the map, the colors were separated starkly. Pink dots covered the majority of the Metro area, while blue dots spanned most of Detroit proper. 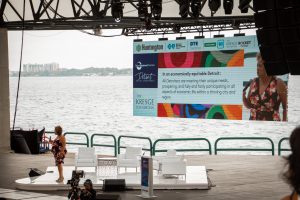 “As we continue to talk about equity,” Goss said as the crowd sat with this visual, “Race matters.”

She continued, speaking to the wage discrepancy between the Metro area residents and those who live in the city. And in terms of the middle class, those who make from $52,600-$131,400 annually she stated, “But the problem with that is that two-thirds of Detroiters are making less than $50,000 a year.” Continuing, she stated that according to Detroit Future City’s data, the progressive motion of Detroit is not as conducive for Black middle-class households as it is for upper-class white households. To this data, Goss shared that “You can’t grow the city if you’re not growing places for everyone to be able to prosper.”

Goss suggests as a city we increase the number of middle-wage jobs ($18 and more), improve educational outcomes at all levels, and increase capital access and support for minority-owned small businesses. Other strategies she spoke on included increasing access to affordable, quality healthcare, growing and strengthening middle-class neighborhoods, and increasing access to quality, affordable housing.

Jared Fleisher spoke to the future of the office space as more people return to work. According to his data, 73% of employees want flexible remote work and 60-80% of CEOs are adopting a hybrid work model. At the end of June 2021, 25% of people returned to the offices in Detroit. As there are so many companies looking to utilize less space in a hybrid working situation, Fleisher spoke to the future of Downtown utilizing excess and obsolete space for residency. 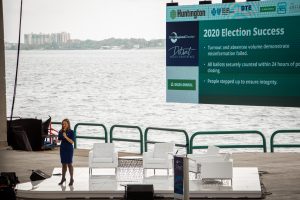 Near the end of the conference, the speakers leaned towards upcoming, as well as past, elections. Jocelyn Benson, the Secretary of State, spoke of the success of the 2020 election and how Detroiters should feel confident that their vote counted, and will continue to count. As to those in power who claimed the 2020 election was subject to fraud, she stated, “There is yet to be any consequences to those who abuse their power…. That’s [disrespect of the system] going to continue unless we draw a line.” Following Benson, was Sheila Cockrel from Citizen Detroit who spoke against proposal P.

The last sole speaker of the event, Michelle Oliver, Multimedia Journalist from Live in the D, WDIV-TV 4, and NBC, spoke to restaurants and their ever-smaller margins, “Every single table makes a difference,” Oliver said. For restaurants throughout Detroit, keeping doors open is harder than pre-pandemic. Staffing is low (66% of restaurants are more than 20% below normal staffing level), costs are higher (62% report higher operating costs), and many in the hospitality industry face general uncertainty.

Oliver closed by stating that reservations were up in April 2021 versus April 2020, and sends hope that Detroit’s hospitality industry can recover fully from the pandemic. “Let’s rise from this too,” she stated.

The 2021 Detroit Policy Conference, though it looked quite different from past years, was quite a success and discussed many topics on Detroiters’ hearts and minds. As we as a city continue to recover from recent physical effects such as COVID-19 and flooding, and as we continue to challenge systemic issues such as racism, inequity, and job loss, let us keep Oliver’s words in mind. Let us rise together. Let us help this city—it is every part—rise back to its knees, its feet, and maybe rise enough to fly.

Putting the People First When it Comes to Sustainable Urban Design