Nolan Simon is a Painter who Thinks he’s a Photographer 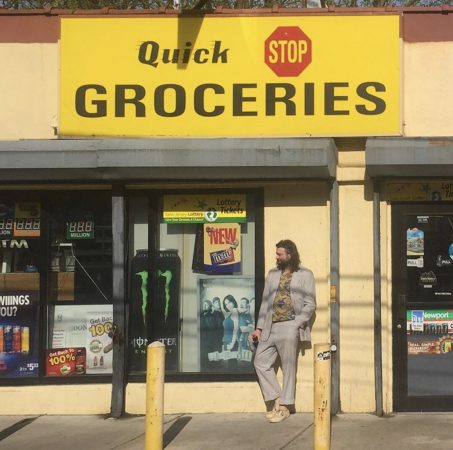 Nolan Simon is one of the few painters I know who makes things that look like other things. Like snapshots of people plucked from the Internet and newspaper clippings, landscapes and closeups of feet that reads like haikus. For what it’s worth, he’s also one of the most charismatic and grounded people I know—as capable of holding his own in a nuanced conversation on politics as he is answering all my obscure questions about gallery politics and art theory.

When he made the decision to quit his day job to pursue art full-time a friend warned him that the average painting career lasts four years. In other words, don’t spend the rush of art money on blow and frivolous holidays. Or, more realistically, be prepared to start again.

Simon is preparing for his next solo show at NYC’s 47 Canal and goes into his studio everyday like it’s his job—because it is—and lives with two black cats whom his partner, Janna, lovingly and defiantly, refuses to tell apart. Everyday he drives out of his way to visit his favorite cafe because he cares about a good cup of coffee and knows that excellence is worth the effort.

We sat down to talk art and sound. He also made what may be DII’s most eclectic playlist to date, including everything from Cardi B to Sloan.

CVh: Pretend we never met. Tell me about your work.

NS: I make paintings. Most of my works are based on images I find, either on the internet or I happened across them in some other way.

CVh: At the height of an ambitious career, you moved from NYC to Detroit—with continued success. Tell us about that.

NS: I moved back to Detroit in 2014 a few months out from a show with 47 Canal. The idea was to isolate, get away from the distractions of Brooklyn. Detroit has always been a better place to hunker down and work. I’ve been very lucky being able to show and sell my work. Being in Detroit has made it possible for me to paint and teach one class a semester without feeling too financially precarious.

CVh: Name an artist who currently inspires you.

NS: I really love the energy and attitude humming around the Hamtramck Ceramck studio. Visually, I have been enjoying Mimi Lauter’s new pastels.

CVh: What do you miss most about NYC?

CVh: What do you miss most about Detroit when you’re away?

CVh: What were you listening to in high school?

NS: Once. I sang Robyn’s Call Your Girlfriend.

NS: Something by Fela Kuti. I don’t feel it’s important to differentiate songs with Fela, right?

CVh: What’s the characteristic you like most in people?

NS: When someone’s description of something brims with familiarity, and yet totally surprises you in it’s broader contours.

CVh: Dislike the most?

NS: A lack of patience.

NS: Ha! I can’t remember the last time I made out to music (that’s a lie), but I did have a memorable make out to a mega-Sade mix once—and another in the bathroom of a goth club. My makeout soundtrack contains multitudes.

CVh: Sound of waves crashing or the sounds of crickets?

CVh: Do you play any instruments?

CVh: If you could only hear one sound, on repeat, in your car forever, what would it be?

NS: The periodic awkward giggle of someone enamored by a new partner.

CVh: How about memorable shows…Small Brown Bike, Thoughts of Ionesco and Voglio Capirlo, and Capture the Flag in the basement of the Vegetarian Grocer in 1999—Martial Solal on his 80th birthday at the Village Vanguard in 2007, Wolf Eyes at 3am at Churchill’s in Miami.

CVh: Artist you most wish you saw live, in their prime?

CVh: On a scale of 1-10—least to most—how obnoxious are these questions?

The above works have been provided courtesy of 47 Canal and What Pipeline, respectively.