Peter Shin is Making His Mark on Detroit 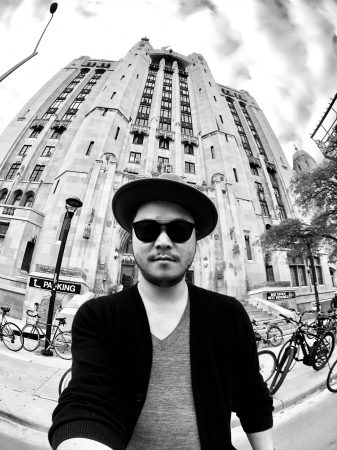 TIME Magazine recently named the Detroit Foundation Hotel one of the World’s Greatest Places of 2018. Which probably has something to do with Peter Shin.

Sure, he didn’t design the place—McIntosh Poris & Associates had something to do with that. Nor did he design the menu—that’s the work of Chef Thomas Lents. His work is far subtler and yet equally profound. He’s the person in the background making sure it all runs well. Not in a GM way. In the way that the right music, at the right volume, will make your meal taste better.

He’s bringing in the people and showing them a good time—whether “people” are hotel guests, dinner patrons or Rude Jude in town recording from the hotel’s podcast studio.

Among other things, many of which remain a mystery to me, he’s curator of music for the Aparium hotel group at large, and, along with his “work wife” Jennifer Lee, is responsible for the Detroit hotel’s eclectic programing that includes local hip hop and jazz, national acts such as Johnathan Rice and a delightful and sold out workshop with famed designer, Aaron James Draplin.

It’s all very new and experimental.

Shin’s from Seattle. When I ask what he did after college he tells me he applied to, and was accepted by, 14 different colleges. He gathered the acceptance letters, handed them to his mother and said he wasn’t going to any of them. He was off to pursue a life in music. His mother framed the letter from UC Berkeley. It still hangs beside her bed.

He started booking bands. Then got into cooking. It takes two lunches for him to reveal a former life as a chef that spanned a decade. After burgers—second meal—he recounts adventures with Shep Gordon in Hawaii from his Shinola days and exploring his hometown on scooter with his Spanish wife, Beatriz Callizo AKA Bea (pronounced Bay-yaand). He takes it down to earth with a vision of his two-year-old in costume shouting “I am Iron Man” and punching him in the face. “The kid’s strong. My vision was blurry for hours.”

His two sons, age 2 and 5, are the subject of much of his photography. “People look at my photos and are like they’re so cute. You make me want to have kids. I remind them those images capture a few seconds out of the day—and there are a lot of seconds in a day.”

Yes, there are. And Shin seems to be making use of each of them.

Peter Shin: After six years at Shinola I wanted to focus on my true passions: food, music and arts. Roe Peterhans was kind enough to introduce me to Bob Lambert at the Foundation—and what perfect timing! They were looking for someone to implement some specific programing that would add Detroit culture into the mix.

CVh: What’s Happening at The Foundation?

PS: What isn’t happening at the Foundation?

I’m very proud of how our Thursday After Dark series has unfolded. It’s a collaborative production between my work wife Jennifer Lee, Lifestyle Director for the Foundation, and myself along with fellow collaborators Adrian Tonon, of Sickem records, and Michael Reyes, a local beat poet and the mastermind behind We Are Culture Creators. Together we’re bringing in some incredible talent along with local visual artists. The evening is amazing in itself, but what’s really astonishing is the networking and conversations that happen throughout. This is what makes it special.

Chef’s Table is something that has a lot of people curious.

PS: Chef’s Table is where we bring together 12 complete strangers to get to know each other through an evening of storytelling and music, by Chef Tom and myself respectively. Prefix meal. Prefix wine pair. A focus on locally sourced ingredients. A new experience each time.

CVh: How would You Describe the Music at the After Dark Series? Genre?

PS: A cup of verbal tea. Beat poets mixed in with neo-soul fusion spanning jazz, hip hop and R&B to a J. Dilla remix from Modern Element to a three to four to five piece jazz experimental band. All over the board but somehow makes a lot of sense.

CVh: How Do You Listen to Music at Home?

PS: Vinyl whenever possible. Sonos is our main way of listening to music whether it’s enjoying one of my favorite radio stations in the US—like KUTX in Austin, Texas—or having something like Sonny Rollins in the background. Music is constantly playing in our house and on car rides.

PS: Like a big bubbling pot cooking up something good.

CVh: Do You Play an Instrument?

PS: Guitar, drums, bass, Moog synths and most woodwinds. Tenor saxophone being one of my favorites to play.

CVh: Tell Me Something I Don’t Know.

PS: Bone marrow has been.

CVh: Has Been What?

PS: Bone marrow has been a direct influence from St. John’s Fergus Henderson. He’s an OG that’s been featured in all the travel shows for being one of the first to utilize the less desirable cuts and to use nose to tail.

PS: Total Chaos: The Story of the Stooges.

PS: Nirvana Live at The Paramount Theater in Seattle Halloween 1991. Thirteen years old and it changed my life. I was with my mom, BTW, so thanks Mom!

CVh: Artist You Most Wish You Saw Live, in Their Prime?

CVh: Last Album You Heard in its Entirety.

PS: Anything that was supervised by Susan Jacobs. She is one of my heroes and what a great job to have. I think it was her ability to make the artist understand why the movie needed this particular track. So going back to the question it would be American Hustle.

CVh: Name Three Artists, Musical or Otherwise, I Must Check Out.

CVh: Question I Forgot to Ask?

PS: What would be my death row meal?