Rockin’ in the D with Rock Reporter Erica Banas

Covering over 60 Stations in the U.S. including WRIF and WCSX, Erica Banas is basically a Renaissance Woman 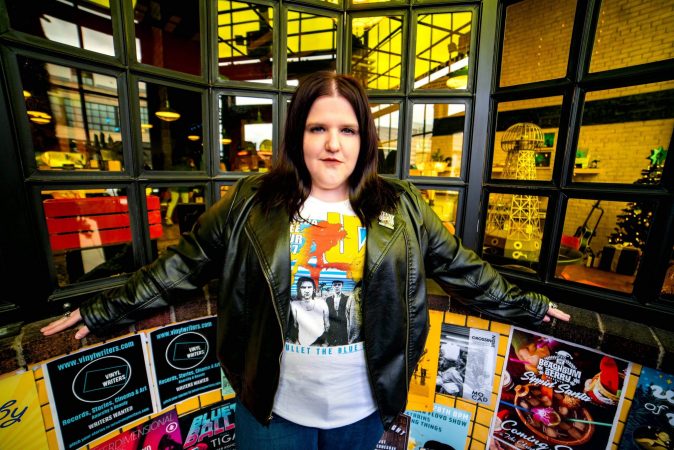 Detroit Sounds is a bi-weekly discovery series where we profile musicians, industry professionals, and music insiders, and have them curate playlists based on their likes, as well as a brief chat on Detroit as a whole.

Maybe I’m a little biased, but I love Erica Banas. Her wit is unmatched when it comes to her wordplay, she’s a walking encyclopedia of music knowledge, and it helps she’s probably the smartest person I know, let alone the best Rock reporter I’ve ever had the pleasure of teaming up with.

During my time at Beasley Media Group (formerly Greater Media), Erica was (and still is) not only a best friend and teammate that I could count on, but she was also my teacher, my gut check if I was being too snarky, and it got to a point where people confused us walking through the hall because we possessed the same badass swagger.

Either that, or it’s just because we’re both short and have multi-colored hair. At any rate, Erica knows what she’s talking about when it comes to music. As the subhead states, she’s “basically a renaissance woman,” as her Twitter Bio has said from the time I’ve known her. And that’s not ego. She just IS that cool.

From Dave Grohl to David Lee Roth, her love for Keith Richards and Hair Metal, to her interest and knowledge in things like Creem Magazine, what LP/Full Length released when, and much more, I give you the eclectic responses to our ridiculous Detroit Sounds questions with Erica Banas.

AN: How do you listen to music on your personal time?

EB: When on the go or working out, I’ll find something on Apple Music. If it’s the weekend, I’ll put something on my turntable.

AN: The last album you listened to in its entirety?

EB: Nine Inch Nails’ cover of U2’s “Zoo Station” showed up on my “Chill Mix” on Apple Music the other day, and then I discovered it was part of a cover album of Achtung Baby called AHK-toong BAY-bi Covered. Some unreal covers on there, including Jack White doing “Love is Blindness,” The Killers doing “Ultraviolet (Light My Way)” and Garbage doing “Who’s Gonna Ride Your Wild Horses.”

AN: Motown, Techno, or Garage Rock?

EB: This is a tough one. While most might expect me to go with garage rock, I have to choose Motown. All of those hits, all of that history! I could go on, but I’m trying to behave and stick to the suggested response length.

AN: What’s an Instrument you wish you could play?

EB: I think most of us, including myself, would love to be a guitar god, but there’s something very appealing about playing a niche instrument. On this one, I’m torn between a harmonica and a sitar.

AN: If you had a theme song, what would it be?

EB: Great question, and it’s something I have thought about a lot being a fan of wrestling and baseball entrances. I have multiple options, but I always seem to go back to T. Rex’s “Chariot Choogle.” What a great groove!

EB: I’ve been fortunate enough to attend some amazing shows in my short lifetime, but there’s a special place in my heart for the time I saw U2 in 2017 on their 30th anniversary ‘Joshua Tree’ tour in Cleveland. They’re my favorite band, and they played my favorite album in its entirety. The fact I only cried three times during the show was a minor miracle.

AN: Favorite musician you hate to love?

EB: It’s not so much a musician, per se, but considering rock is my first love and it’s what I cover on a nearly daily basis, it kills me when even I can’t escape a slick pop song. “Sucker” by The Jonas Brothers is a great example. I don’t want to like the song, but it’s so f*cking catchy! To paraphrase Gloria Estefan, sometimes pop music is gonna get’cha.

AN: What song do you cry to in the shower?

EB: Not really a shower crier, but I am a very emotional person and could really cry anywhere. (Remember how I said crying only three times seeing U2 was a minor miracle?) However, a song that always makes me cry is Elvis Presley’s “If I Can Dream.” Just a beautiful song and an incredible vocal performance.

AN: How has music shaped your life as a person?

EB: As a teen, I probably should’ve sought therapy. Instead, I leaned on music. It has always been and continues to be the way I seek release from the stress around me, and it helps me clear my head and find answers that I’m looking for.

AN: What’s your headphone-only music?

EB: Probably all of the random pop songs I love that I probably shouldn’t love. Oh…and show tunes. So…many…show tunes!

AN: First song that comes to mind?

EB: Right now? In this moment? Probably Lukas Nelson & Promise of the Real’s “Die Alone.” Caught their set at the Bourbon & Beyond festival in Louisville, Kentucky in 2019. Never saw them live before, and they just blew me away, and I’ve been regularly listening to them ever since.

And for the first time, this playlist has a THEME other than it just being Erica’s playlist. Being a badass Feminist, her choice is to dedicate this list is absolutely awesome.  She shares:

“All Tracks are from women/women-fronted acts who have yet to be inducted into the Rock and Roll Hall of Fame. The Rock Hall has notoriously omitted many women artists. Probably has something to do with the lack of women in the nominating committee.”

Summer Heat Getting to You? Here are 7 of the Best Ice Cream Shops in Detroit

Have You Ever About Detroit’s Beginning? Here is a 320 Year Old Story